The island of Corsica, home to this 15th Century convent (and also architect Amelia Tavella) has had a little face lift.

Convent Saint-François was first built in 1480, and now listed as a historical monument, this renovation project sought to rebuild the religious building while preserving traces of its history. 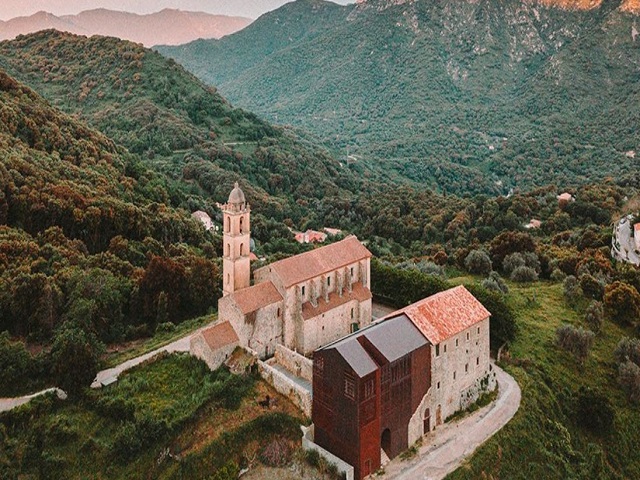 Convent Saint-François is located in the southern part of the French island in Sainte-Lucie-de-Tallano. The building sits on an elevated site amid rolling Corsican hills and overlooking the village below. The convent is composed of two connected wings, one of which houses a belltower. There’s a cemetery at the rear and an olive grove at the foot of the site, which the architect describes as ‘a collar’.

‘I believe in higher and invisible forces,’ explains Amelia Tavella. ‘The convent Saint-Francois of Sainte-Lucie-de-Tallano, built in 1480, is part of this belief. Housed in a height, on its promontory, it was a defensive castle before being a place of prayer, of retreat, chosen by monks aware of the absolute beauty of the site. Faith rallies to the sublime.’

When Tavella embarked on the project, vegetation had taken over the structure, growing in between cracks in the stone. rather than totally remove this ‘plant armour’ that had grown over time, the architect decided to honour it, viewing it as an ‘essential component of the historic monument’ that had protected the building from collapse while it lay empty.

Tavella preserved the existing stone ruins and added a copper-clad extension that mimics the shape of the existing rooflines and arched openings. ‘I chose to keep the ruins and replace the torn part, the phantom part, in copper work which will become the house of the territory,’ continues the architect.

On the dialogue between past and present, the architect concludes, ‘building after ruins is the past and modernity embracing each other, making the promise never to betray each other. One becomes the other and no one is erased. it is an interweaving of an older time in a new time which does not undo, which does not recompose, but which links, attaches, grabs, two unknown and not foreign parts, one of which becomes the extension of the other, in a sort of transfiguration.’

‘I have always built this way on my Corsican island, like an archaeologist who brings together what was and what is and what will happen; I do not remove, I hang, bind, affix, slide, resting on the initial ground, on the original work: the copper reveals the stone, the monument and it sacralises the ruin form and poetic state.’

Images by Thibaut Dini via Designboom