South Korean architecture firm Aoa Architects has drawn inspiration from an unlikely source for its latest apartment project, with shapes and materials that resemble the videogame Minecraft.

Called Cascade House, the five-storey building in Seoul is clad in red and white tiles that look like pixels on a game screen. 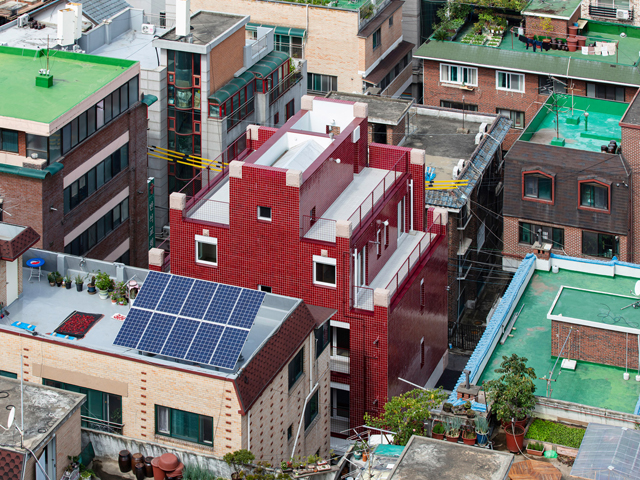 From afar it has the appearance of being built with the game’s distinctive cube shaped blocks and follows a distinctive sloping outline.

Also citing lego blocks and centuries-old Belgian gabled houses as inspiration, the firm were adamant about designing a project that stood out for its ‘uniqueness’.

“Most family houses in the neighbourhood are the result of the auto-generative form [caused] by building regulations, such as solar setback requirements and the economic inevitability to accommodate as many units as possible,” explained the practice.

“The design was settled with partial decorations that could be easily done without causing trouble for the contractors,” project architect Uk Sunwoo told Dezeen.

The larger more grand room opens onto not one but two terraces and features an attic space above.

Rough-cut stone blocks sit on top of each of the building’s corners, in stark contrast to the other colours.

The symmetrical interior of the block is divided by a central staircase finished in exposed concrete and thin steel balustrades.

Each individual apartment is also symmetrical and although the exterior may have been inspired by video games the interior follows a more sophisticated palate of wood, exposed concrete and white plaster.

The red and white ‘pixel’ tiles of the outside are repeated inside on the splashbacks.

The living room is cut in half by a marble pillar at the centre of two sliding wooden doors leading to the kitchen or bedroom, separated by a glass-brick partition.