Nestled in a mountainous valley two hours away by car from the centre of Beijing, The Chapel of Sound is a monolithic open-air concert hall with views to the ruins of the Ming Dynasty-era Great Wall.

Designed by Beijing-based architecture office, OPEN, to look as a mysterious boulder that had gently fallen into place, the building is built entirely from concrete that is enriched with an aggregate of local mineral-rich rocks, and encompasses a semi-outdoor amphitheatre, outdoor stage, viewing platforms, and a green room. 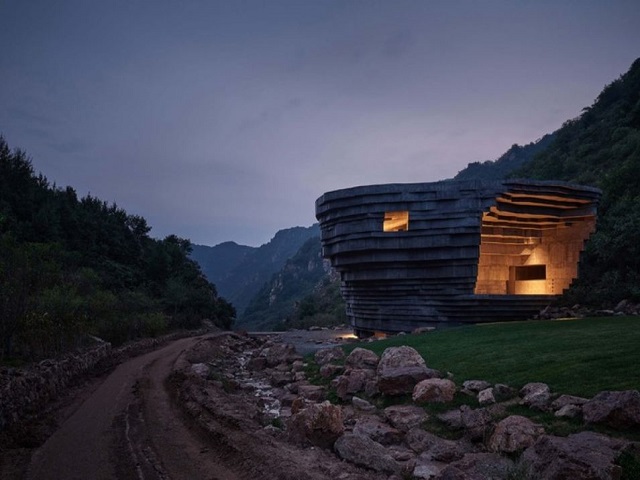 While designed to capture the unfamiliar and deeply touching experience of music performed in the cradle of nature, the architects also wanted people just to calm down and listen to the sound of nature, which they believe is profoundly inspiring and healing. When there is no performance, the concert hall is also a tranquil space for contemplation and community gatherings with stunning views of the sky and the surrounding landscape.

OPEN’s founding partners Li Hu and Huang Wenjing were driven by a desire to minimise the footprint of the concert hall in the valley, creating a structure that was in dialogue with impressive natural landscape, while also feeling undeniably man made.

The resulting rock-like structure is composed of an inner and outer shell with the space between operating like a truss, and was ultimately achieved through close collaboration with international engineering firm, Arup. Formed from concrete, each striation cantilevers out from the previous layer to create the inverted cone shape.

Winding staircases weave through the building to a rooftop platform that offers panoramic views of the valley and Great Wall. In the interior spaces, accents of bronze for details such as handrails and doors are used to create a warm contrast against the concrete.

The brief for the project was very open which inspired the architects to research all aspects of performance, looking at how the behaviours of sound could be a driving force behind the final shape of a building; Li and Huang described wanting to: “see the shape of sound”. Ultimately, they were drawn to the ways sound reverberates in natural spaces such as caves. Having designed theatres and concert halls, they knew the challenges here was how to create excellent acoustic environment without introducing additional sound absorbing materials.

Working with acoustic engineers, OPEN looked at the many ways people will experience sound in the concert hall and defined openings that act both as the sound absorption areas and providing a connection with the exterior environment.

There is an inherent air of mystery around the Chapel of Sound that draws you in as you approach the building. This extends to how people will interact with the space, from being a place for individual reflection to a venue for large-scale concerts, the structure can be experienced in many different ways.

Huang said: “We wanted the definition of the space to be not so absolute, thus allowing for possibilities. Solitary or communal, music or sound of nature, gazing into the starry sky or connecting with one’s inner self – it’s open to the interpretation of the users”.

With no heating or air-conditioning, the Chapel of Sound consumes minimum energy, something OPEN was very conscious of when designing the building. The openings also allow the natural elements to come inside, a void in the centre of the rooftop allows daylight to enter the structure and naturally illuminates the performance spaces. When it rains the water will also cascade through the void, however, inspired by the Pantheon, OPEN designed a drainage system that quickly drains the water away.

Images by Jonathan Leijonhufvud and Nan Ni via ArchDaily