Three engineered timber office towers worth $173 million have been approved for a site in Sydney’s Lower North Shore.

The eight, 12- and 18-storey towers proposed by Arrow Capital Partners and designed by Fitzpatrick+Partners will be built on the 7636sq m corner block at 29-57 Christie Street, St Leonards. 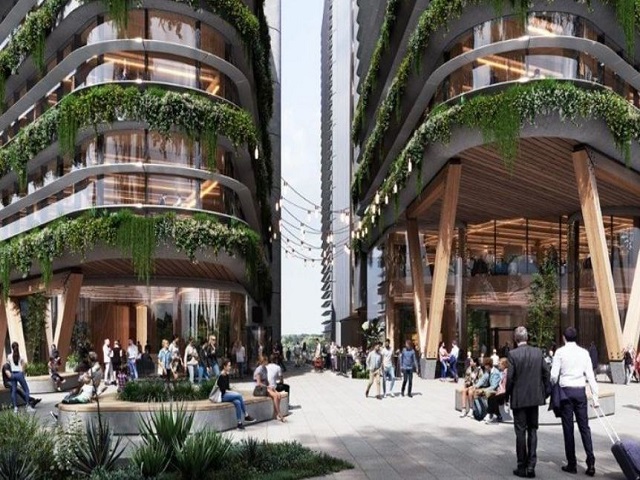 The application was lodged in December last year and was approved by Sydney North Planning Panel on July 9 with construction of the Arrow development expected to start in 2022.

The development is expected to be one of Australia’s largest engineered timber developments made of cross-laminated timber with key components, such as the columns, assembled rather than constructed on site.

It joins a growing number of timber towers in Sydney, including Atlassian’s 40-storey project next to central station and Lendlease’s 30m-high Daramu House development at Barangaroo.

The plans showed a combined 60,000sq m of commercial space incorporating retail, professional suites, gymnasium and childcare in the podium with the office space above.

It also includes external terraces, green roof spaces and building-linking bridges as well as the extension of an existing park by Arcadia Landscape Architecture.

“The design was advanced in step with the development of the St Leonards and Crows Nest 2036 Plan, with the detailed design solution prepared by the F+P team working from home during last year’s Covid lockdown,” Fitzpatrick said.

“Appropriately, the planning assessment presentation and approval was achieved during Sydney’s latest lockdown using a combination of ‘teams’, ‘zoom’ and traditional phone hook-ups, all at the same time.”

The first stage of the development involves demolition of the southern half of the site including Fitness First St Leonards, Goodstart Early Learning Centre and a café.

The second stage of the development involves adapting the existing building on the northern half of the block into an 18-storey building.