A 1.3ha super-site in Richmond has been snapped up by Melbourne-based developer Tim Gurner, and is sounding out plans for a multi-tower residential project.

Gurner has purchased the 81-95 Burnley Street site, currently a brick warehouse tenanted by Melbourne event company Harry the Hirer, from Astrodome Hire after a confidential competitive tender process between a select group of Australia’s largest listed and private developers. 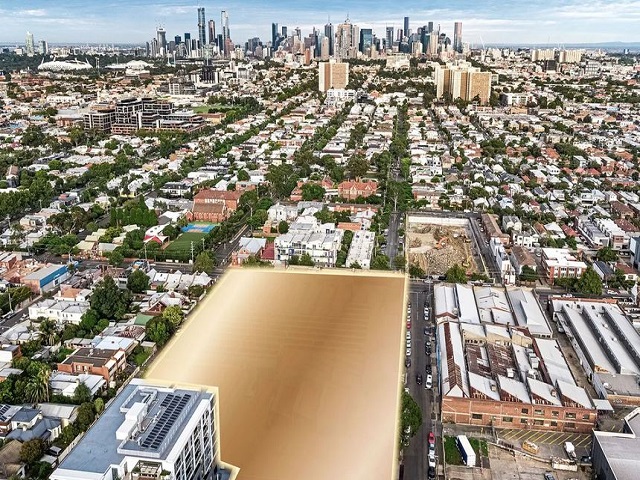 He plans to build up to 500 apartments, plus a retail village and mixed-use precinct, with an end value of more than $800 million.

The project will span five buildings of up 12 storeys, although some would be lower at about seven storeys, and provide 9000sq m of commercial space.

“We have been fortunate to secure many prime sites during the past few years which have allowed us to explore larger precincts and place making,” Gurner said.

“This site is one of the largest we have acquired and will really allow us to create something truly special and be a truly self-sustaining village within a suburb.”

Gurner, who controls an east coast pipeline of more than 7000 apartments with an end value of about $7 billion, said a portion of the project would be offered as a “high-end” retirement offering.

The developer plans to allocate 10 per cent of the project’s dwellings towards affordable housing.

Two heritage buildings on the site, the Russell Manufacturing Co building and the former Repco building, will be partially retained.

The development will also deliver a new public park and cultural area of approximately 600sq m. Gurner said the development had been inspired by New York’s meatpacking district in Greenwich Village.

Gurner is pressing forward with plans to redevelop the historic Chapel Street retail landmark into a $1.4 billion mixed-use precinct that will include a 170-room hotel and between 550 and 650 apartments and a small office component.

The Chapel Street deal was the first struck by Gurner since securing a $150-million equity commitment from Qualitas to acquire distressed sites, develop them and split the profits with the Melbourne-based real estate financier.

Qualitas is also partnering with Gurner on a $1-billion build-to-rent development fund as part of his plans to diversify his portfolio and undertake bigger scale commercial and mixed-use projects.

Gurner also has plans for its first project on the Gold Coast. The development will comprise a hotel and up to 600 apartments on the site of Ralan Group’s failed Sapphire Project at Budds Beach.

The $600-million Surfers Paradise project will be located on a 1.3-hectare site at 112 Ferny Avenue. It is expected to launch in the third or fourth quarter of the year, immediately after planning approval is secured.