During the celebration of Olympic Day, the International Olympic Committee inaugurated its new headquarters, Olympic House in Lausanne Switzerland.

The project was designed by Danish architecture firm, 3xn, and aims to bring the 500 employees currently spread across four locations, under the one roof at the single state of the art site. 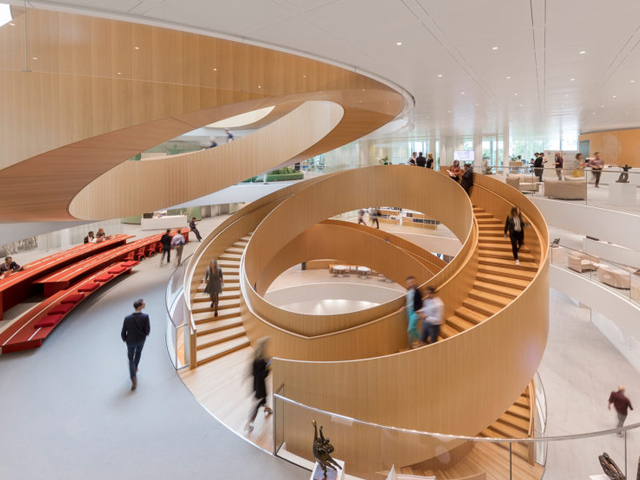 In 2014, the IOC decided to move ahead with the consolidation of its head office with an international architecture competition (led by a jury of renowned architects) of which 3XN was selected as the winner. Following their win, 3XN teamed with Swiss architecture firm IttenBrechbühl to complete the construction of the project.

The architects provided the following description of the landmark site:

The new headquarters of the International Olympic Committee will bring together 500 employees currently working in disparate offices throughout the city. The headquarter is designed around three key values/objectives: movement, flexibility and sustainability. With its dynamic, undulating façade, the building will appear different from all angles and convey the energy of an athlete in motion. Its interior is designed with as few structural constraints as possible. This open and flexible environment will adapt to multiple work styles now and in the future.

The IOC values are manifested throughout the Olympic House. Transprancy, Unity, Collaboration, Fair Play and Sustainability. The visual transparency of the building not only provides great views to the lake beyond, but acts as a metaphor for the IOC transparent and open organization. Allowing the IOC HQ’s inhabitants daily work to be visible is a reflection of the fair play and open values of the IOC. Its interior is designed with as few structural constraints as possible. This open and flexible environment will adapt to multiple work styles now and in the future. Furthermore the design is also intended to encourage interaction, communication and knowledge sharing among staff.

3XN’s design respects both the château’s legacy and park setting and make as soft a transition as possible from park to building. As a recreational neighbourhood, the setting of the IOC Campus is uniquely situated to take full advantage of its beautiful location on the border of Lac Leman. The Louis-Bourget Park at Vidy is used by both staff of the IOC Headquarters and heavily used by members of the general public; cultivating a feeling of transparency and openness.

The consolidation of the functions of the current Olympic House and Pavillon into the new IOC Headquarters at the Eastern edge of the site provides for the same amount of green space on the campus, while more than doubling the current number of square meters. In addition, the careful placement of the Point of Interest Pavilion at the end of a wooded path, with beautiful views over the formal IOC garden, towards the Chateau and the new Headquarters, will be a strong gesture of friendship to all visiting tourists.

Minimising the environmental footprint, along with its sustainable features enables the new IOC HQ to represent the IOC commitment, while not compromising the quality of the working environment. Through the green roof, terraces and fitness center, the building and natural environment is rich with the opportunity for employees to participate in sport in order to energize themselves throughout the day. Sustainable features such as low flow taps, toilets, and rainwater capture significantly reduce the building’s use of water; while the solar panels located on the roof (and out of sight) reduce the need for electricity from the grid.

Soaring the full height of the building and connecting all floors in a central atrium, the staircase is a visual expression of staff and stakeholder unity; and most certainly the Olympic Spirit, which promotes mutual understanding with a spirit of friendship, solidarity and fair play. The staircase and its periphery will form the central area for social activity and promote a sense of community and transparency within the organization.

Movement of an Olympic Athlete

A transparent double glass façade is the hallmark of our design for Olympic House. Comprising a straight inner layer and a curving, faceted outer layer, the result is a dynamic form that evokes the movement of an Olympic athlete. By optimizing the façade to floor plate ratio and creating a fully glazed façade from floor to ceiling, 3XN’s design brings daylight deep into the building. The inner layer features an integrated sunscreen, which enables the outer later to maintain its fully glazed and transparent appearance. As there is a highway close to the building’s north side, the double façade provides valuable noise reduction for the interiors. A cavity between the façade layers enables easy maintenance while allowing the dynamic and elegant skin.