South African designer Shaakira Jassat has created “rain catching” panels that allow highrise buildings to save water that would otherwise be flushed away.

Called Aquatecture, the panels are fitted on the side of buildings and are small enough to suit inner city environments where other rain harvesting technology simply wouldn’t fit. 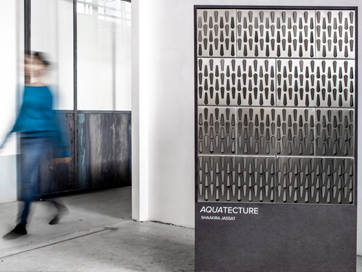 The panel collects water through its punctured surface that has perforations in a funnel shape, which Jassat settled on after testing several designs.

Motivation for the panels came from Jassat’s experiences living in South Africa, where the threat of the taps being switched off in the drought looms over large cities.

Jassat is currently researching the potential for the panels to pull water from the atmosphere via condensation, if hooked up to other equipment.

She chose stainless steel as the panel material due to its rust resistance and durability.

Jassat wanted the water harvester to integrate into dense urban areas with a cohesive visual identity that looks stylish and can be installed efficiently alongside existing architecture.

The technology works by combining with a building’s grey-water system and recycles it in the same way as water from sinks, washing machines and sometimes toilets.

Jassat exhibited Aquatecture alongside research into aqua plants at Dutch Design Week and  leads her own practice Studio Sway.

She spoke of the concept of the Symbiocene that humans are now moving into post the Anthropocene.

This idea highlights the importance of living symbiotically alongside nature as a way of dealing with changing climates.