Brisbane apartment sales in decline but set to steady out

Brisbane’s apartment market is showing signs of a significant dip with prices dropping by 31 percent in the latest quarterly results.

But experts believe the pace of the decline is slowing down and the market is set to take a turn, as apartment values and rents continue to stabilise. 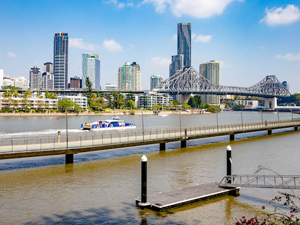 According to analysis from Urbis, the city has been faced with low levels of new supply, with the pipeline of new apartment builds slumping to nearly 28,000 from about 44,900 a year.

In the September quarter 146 new apartments were sold, which Urbis director Paul Riga said is in line with the four quarter average, though down by 212 sales on the previous quarter.

“The inner Brisbane new apartment market continues to tick along, albeit at a subdued level. We aren’t seeing any major changes, with little movement in demand, and low levels of new supply being added,” he said.

“The strength of inner Brisbane’s rental market is expected to be an appealing driver in attracting investors back to the new apartment market.

“With currents levels of population and employment growth combined with a declining level of apartments being completed the rental price growth trend is expected to continue over the coming 12 months.”

Not all of the city was performing slowly however: 52 percent of all sales were in the inner south region of Brisbane.

According to Urbis’ analysis, the indicative vacancy rate for new apartments is a low 0.6 percent.

Two-bedroom, apartments were the most popular product type and accounted for 47 percent of total sales, while the number of three-bedroom apartments also increased nine percent.