Using materials such as oak, bronze and terrazzo to undergo the most extensive renovation in the history of the facility. The project marks the first phase in a multi-stage revitalisation of Brooklyn’s Central Library, which is located along Grand Army Plaza in the New York City borough of Brooklyn. 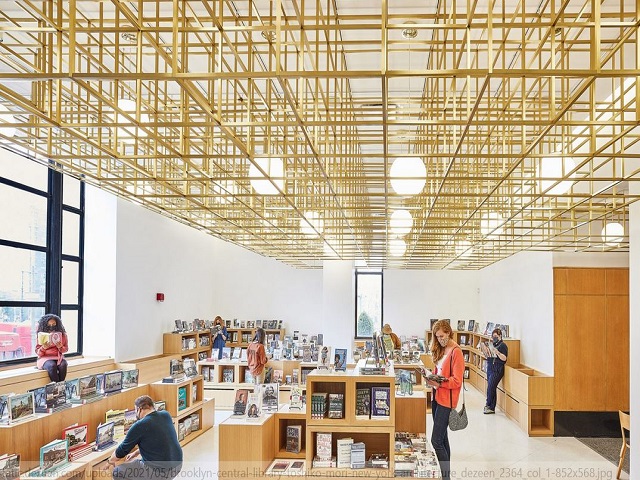 The facility draws over 1.3 million visitors per year.

The Art Deco-style building opened in 1941 and is listed on the US National Register of Historic Places.

The project entailed the refurbishment of existing features and the transformation of administrative areas into public zones. Honey-toned oak, light-coloured flooring and metal accents are found throughout the overhauled spaces.

“We were able to optimise the spatial potential of the Central Branch to engage and respond to the evolving needs of its community and to further its role as an essential civic and community asset,” said Japan-born Toshiko Mori, who leads her eponymous studio in New York.

“Its mission of providing knowledge for free to everyone is now enhanced by increased physical and visual access to its resources.”

The refresh is visible as soon as visitors enter the building. The library’s soaring lobby now features new lighting and a newly poured terrazzo floor, along with historic oak panelling.

A new welcome centre with desks made of white oak and brushed brass is named after Major Owens, a late Congressman who worked as a Brooklyn librarian in the 1950s and 1960s.

Near the library’s grand lobby is a “New & Noteworthy” book gallery that offers a non-traditional browsing experience. Titles are curated by librarians and displayed on open-block shelving.

Overhead, hand-blown white-glass pendants are set within a lattice made of brushed bronze.

“A striking, custom-designed metal ceiling sculpture with speciality lighting invites curious readers to spend time exploring the collections in the room,” the team said, noting that the installation is visible from the street, entry plaza and lobby.

The project also entailed the creation of a “Civic Commons”, where various public services are offered, such as issuing passports and city identification cards. The space will also host local committee meetings, voter registration drives and other civic events.

“Perimeter spaces are finished with bright white interiors, along with new windows bringing light into a formerly windowless concrete interior,” the team said. “The floor finishes in these spaces are light-toned carpet tile allowing for easy maintenance.”

Other work completed during the project include new public restrooms, the refinishing of wood panelling and flooring, and upgrades to the building’s elevators, fire alarm system and heating-and-cooling system. An outdoor plaza was fitted with new limestone and lighting.

In future phases, the library will get a new teen centre and renovated collection wings, among other enhancements.

Images by Gregg Richards via Dezeen