Australia’s ‘build-to-rent’ sector is only in its infancy but, in a post-COVID landscape, is starting to look like an attractive stimulus option for construction in this country.

The sector benefits by being closer to launch than traditional build to sell models. And there’s no need to wait around for pre-sales to kick start a project. 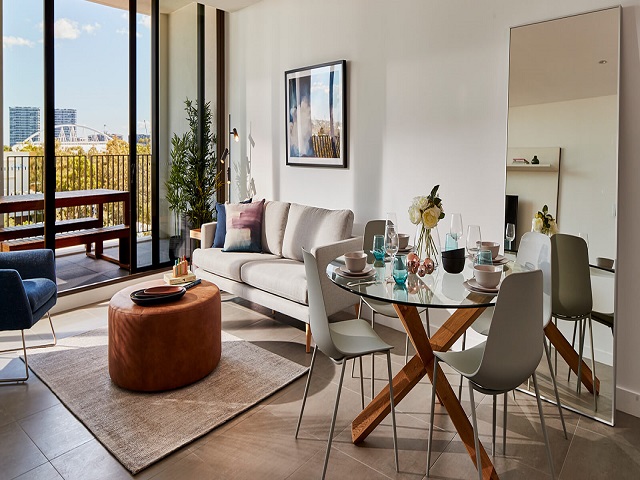 Proponents, including NSW Minister for planning and public spaces Rob Stokes, are keen to see the asset class mature like it has in the UK and the US. Speaking at the opening of Mirvac’s first build-to-rent development LIV Indigo at Sydney’s Olympic Park on Wednesday, Mr Stokes said build-to-rent can attract direct investment in construction at a time when bank finance is hard to secure.

“It is a critical way to ensure housing is built during difficult financial time.”

Mirvac chief executive office & managing director Susan Lloyd-Hurwitz has been an early advocate for the model, with the Olympic Park project a ‘passion project’ five years in the making. The developer has no plans to stop there, with three more in the pipeline for Melbourne.

Ms Lloyd-Hurwitz stated that built-to-rent fills a gap in the market for people who may not be aiming for home ownership on the basis of personal finances and lifestyle. “We are living in an era where property ownership is not the overarching goal of all Australians,” she said. “And those who do aspire to home ownership will on average spend more time in the rental market before they can afford to buy their home.”

The Great Australian Dream of owning a home is still flourishing but the idea is that build-to-rent becomes another choice on the market rather than as an alternative to home ownership, or a stopgap before taking the plunge of full-home ownership.

Mr Stokes said the model was a more “socially just” option for renters, with housing affordability leaving people stuck long-term in substandard housing on unstable leases that could end if the investors decides to sell up or move in themselves.

With this model, renters are treated far better, he said. For example, instead of reserving the prime real estate on the top floor for the people who can afford the penthouse, with build-to-rent, it makes sense to keep the rooftop space communal space for everyone to share.

The differences between a normal strata apartment and a purpose-built rental unit are subtle.

In a win for sustainability, it’s largely about durability: apartment floors are kitted out with resilient pavers rather than carpet so there’s no need to replace carpet between tenants, and what you could only describe as grot-resistant tap and sink fittings have been selected.

Onsite building managers are also available around the clock for maintenance concerns.

Mr Hansen said that because the model is so new to Australia, leasing staff are up against a steep learning curve with prospective renters.

But it doesn’t take long for people to get up to speed, and the market research appears to be paying off, with an already strong interest in the one, two and three-bedroom apartments, Mr Hansen said.

Images Via The Fifth Estate and LIV by Mirvac