This ‘tough’ family home in the heavily dense forests for Mt Coot-tha in Brisbane’s west uses high blockwork walls to protect not only the family dwelling inside but a series of lush gardens within.

Faced with the challenges of the home not only situated by the steep slope at the foot of the mountain, but Australian studio Nielsen Jenkins also had to face the requirements that come with an area that has the second-highest bushfire attack level (BAL40). 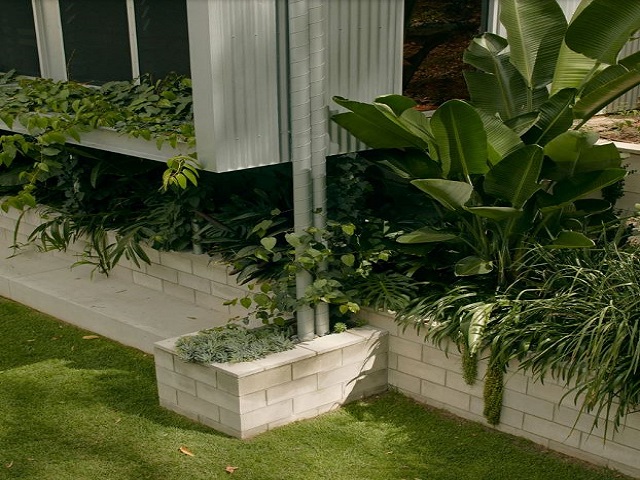 To combat this, the local studio designed the home as a series of low, sloping units linked by a triple-height, “civic-scaled” staircase block that steps up the forested site.

“An efficient stairway axis at the scale of the gum forest runs directly into the contour, and an informal meandering path across the plan allows for functional plateaus or occupiable contours,” Nielsen Jenkins explained.

This layout provides a garage at ground floor level, a large living, dining and kitchen area on the first floor and an area for the main bedrooms on the second floor.

Due to the steepness of the slope, the first floor features a series of smaller level changes, stepping up from a living area and balcony towards a kitchen overlooked by a large internal courtyard.

“These smaller sectional shifts allow a grounded courtyard space adjacent to the living area of the house becomes a kind of ‘village green’ around which the rituals of daily life are lived,” described the studio.

The sloping rooflines on each block follow the slope of the site upwards, each clad with corrugated metal atop a blockwork base.

All of these material choices, as well as those in the interior, were made in accordance with the BAL40 rating, which also necessitated that the gaps around openings be no greater than three millimetres.

“Robust and prosaic materials have been detailed in a manner which will require no maintenance moving forward, and will let the building continue to settle into the hill over time,” explained Nielsen Jenkins.

Internally the exposed blockwork of the central staircase form is contrasted by white walls and wooden floors and furniture.

Taking advantage of the frequent changes in level, a mix of high panoramic windows, skylights and carefully-framed openings aim to capture the feeling of “leaning back” to look at the forest. The apertures are aligned with the tree trunks on the lower levels and the canopy on the upper level.

Around the perimeter of the house a series of “wet walls” have been pulled away to deal with overland water flow, doubling as small, flat courtyard areas that mimic clearings in the densely vegetated forest.

Images by Tom Ross via Dezeen