Windows are great for letting in light, but in summer months that comes with an unwanted side order of heat, causing many people to run the air conditioning non-stop.

Now, researchers have developed windows that can change color automatically when heated by sunlight, to keep buildings cool – and to top it off, they’re solar panels as well. 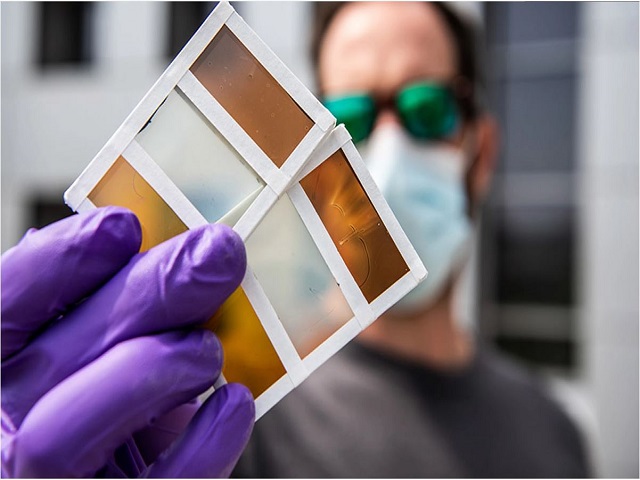 Color-changing glass has been around for a long time, most commonly as transition lenses for eyeglasses that tint automatically under bright light. More recent developments have made it electronic and switchable on demand, and scaled it up to window size. At the same time, transparent (or semi-transparent) solar cells are getting more efficient, to the point where they can be fitted into windows.

In the new study, researchers at the US Department of Energy’s National Renewable Energy Laboratory (NREL) has combined the two technologies into one window. The “thermochromic photovoltaic” tech, as they call it, can switch colors when heated up by sunlight to block glare and reduce the need for cooling, and when it does it also starts harvesting energy from that light.

The windows are made from a thin film of perovskite – an emerging solar cell material – wedged in between two panes of glass, with a solvent vapor injected into the gap. When the humidity is low, the perovskite remains transparent, allowing the window to let light in as normal. But at certain temperatures, the vapor causes the perovskite crystals to rearrange themselves, first into a chain, then a sheet, then a cube. Each new shape changes the color, blocking light to different degrees, and hopefully cooling the room down a few degrees in the process. When colored, the electricity generation begins.

When the glass reaches between 95 and 115 °F (35 and 46 °C), the windows can switch between several different colors, from transparent to yellow, orange, red, and brown, in about seven seconds. That’s quite an improvement over an earlier prototype that the NREL team developed, which could only switch between transparent and one reddish-brown color when it reached 150 to 175 °F (65.5 to 79.4 °C), and took three minutes to do so.

Ideally, the thermochromic photovoltaic windows could help reduce the need for air conditioning, which can be an enormous consumer of energy in hotter times and climes, and even chip in a little extra electricity to help run it. The team says that a prototype window using the new technology could be developed within a year.

The research was published in the journal Nature Communications and developed by scientists at the U.S. Department of Energy’s National Renewable Energy Laboratory (NREL).