Researchers from Purdue University have developed a new white paint that can reflect over 95 percent of sunlight, which can cool the surface even lower than the ambient temperature.

Painted on a building, the new paint could help cut cooling costs and energy use. 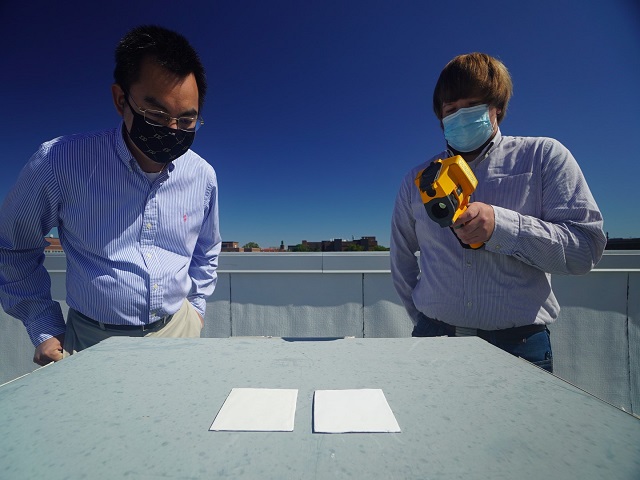 It’s a basic fact of physics that white surfaces and objects reflect more light, and therefore remain cooler. Theoretically, that could be harnessed to help keep buildings cool – after all, air conditioning is one of the biggest guzzlers of energy in the summer months, and studies suggest that painting buildings white can cool entire cities.

Many different radiative cooling paints have been developed over the years, reflecting sunlight using glass, Teflon or, most commonly, titanium dioxide. But they all have their drawbacks.

For the new study, the Purdue researchers developed a new recipe. Instead of titanium dioxide, they used calcium carbonate fillers, which are much more abundant, cheaper, and absorb less ultraviolet light, so they stay cooler. The paint also contains a particle concentration of 60 percent and uses a variety of particle sizes, both of which help it scatter more sunlight.

In total, the new radiative cooling paint can reflect 95.5 percent of the light that strikes it. That’s better than many of the other paints in development, which manage between 80 and 90 percent, although it falls short of the record holder – the Teflon coating, which reflects 98 percent of light.

In another set of tests, the researchers painted some parts of a pattern with the new paint, and others with a regular white paint of the same thickness. Using an infrared camera, they could see the pattern clearly, thanks to the difference in temperature between the two materials.

The team says that the new paint could not only help cool buildings, but prevent outdoor electrical systems from overheating. But to ensure that it is commercially viable, the researchers next plan to investigate how well it lasts out in the elements.

“Our paint is compatible with the manufacturing process of commercial paint, and the cost may be comparable or even lower,” says Xiulin Ruan, an author of the study. “The key is to ensure the reliability of the paint so that it is viable in long-term outdoor applications.”