Developer Hanave has submitted a development application to convert a heritage apartment building in Surry Hills to a boutique hotel named the Hat Hotel.

It takes its name from the building’s origins as the century old RC Henderson Hat factory, which manufactured women’s and children’s hats within the building for 42 years. 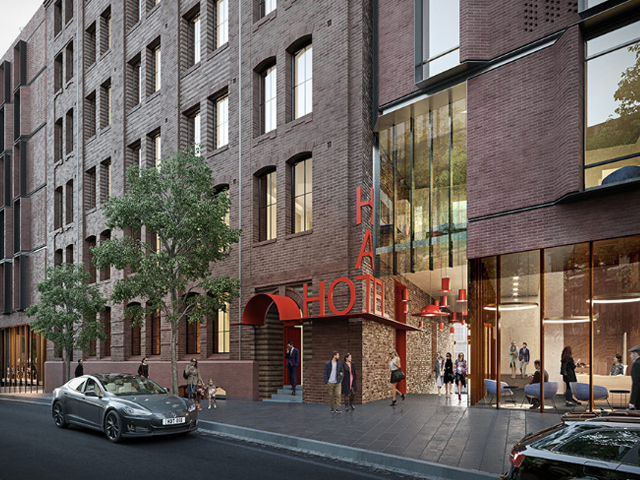 Designed by architecture firm Tonkin Zulaikha Greer, the hotel will have 114 rooms and be completed at a total estimated cost of around $40 million.

The architects won Hanave’s design competition earlier this year beating four other firms with their concept of an adaptive reuse building, at an estimated cost of $50 million or less.

The new hotel will incorporate two new buildings at 7-9 Randle Street and 15 Randle Street, which will have a similar facade to the factory and have an additional two rooftop-storeys.

Hanave has owned the site since 1978 and at some stage converted the seven storey factory building into residential apartments.

All existing masonry walls, timber posts and beams, timber floor structures and ceiling have been retained and will be restored as part of the hotel. The ground floor of the hotel will also feature a new link through the site connecting Randle Lane to Randle Street.

According to the national heritage database the property was purchased by Charles Alfred Henderson in 1910 and the factory built on the site two years later.

The building was designed by architect Thomas Pollard Sampson and was built by contractors Wheelwright and Alderson.

RC Henderson Co then purchased two adjacent blocks expanding the property and also installed a lift and top-floor boiler room in the building.

In 1954 the business went into liquidation and the site was sold four years later to BB & B Ltd, who held it and leased out some of the floors until 1978.