References have always been made to cladding being a building’s ‘skin’ so it was only a matter of time when someone decided to tattoo the cladding.

Enter the Sunac Guangzhou Grand Theatre in China, designed and crafted by Steven Chilton Architects. This new theatre in the heart of Guangzhou, which has a shape informed by the city’s historical connection to silk and is imprinted with patterns that represent its current tattoo culture. 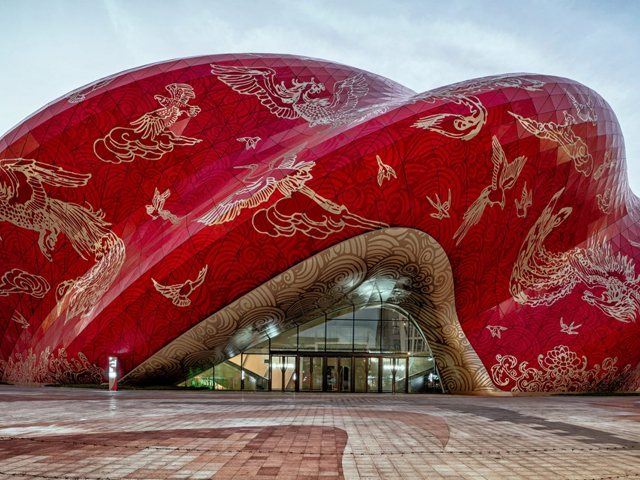 The building’s distinctive cladding was informed by Guangzhou’s history as a key trading port. “Guangzhou is the birthplace of the Silk Road on the Sea, it has been the home of and inspiration for artists who have helped to define the world’s concept of Chinese culture for thousands of years,” said Steven Chilton Architects founder Steven Chilton.

The theater is wrapped in undulating red cladding made from triangular panels, which was designed to recall the folds in flowing silk.

“We have drawn inspiration from traditional and contemporary arts commonly practised in the region. Silk cloth has been made, painted, and embroidered in the city since the Han Dynasty,” explained Chilton.

Across this red cladding, a series of darker patterns informed by tattoo art were drawn. Above this base layer, a series of golden figurative animals that were influenced by a local myth titled 100 Birds Paying Homage to the Phoenix, were added to the facade.

“Tattoo culture has recently gained prominence as a respected artistic medium, driven by a younger generation embracing it as an expression of individuality,” said Chilton. “It has inspired a renewed interest in traditional Chinese culture, where symbols and myths.”

Sunac Guangzhou Grand Theatre is the latest theatre designed by Steven Chilton Architects in China whose aim is to be attention grabbing. “The theatre sits at the heart of a large, mixed-use development, conceived to attract visitors and tourists into a previously under-developed region of the city,” said Chilton.

“To this end, the client wanted a design that could assert itself into the consciousness of the city’s residents and beyond, so yes, part of its job is to project a strong visual identity.”

Images by Chong‐Art Photography via Dezeen