A mixed-use ‘twisted’ tower development will become a new landmark in Melbourne, offering residential and commercial opportunities along the waterfront and setting records as Australia’s tallest tower at 365 metres.

With its impressive height and ambitious twisting, greenery-covered design, you could be forgiven for assuming Southbank by Beulah was destined to remain on the drawing board. 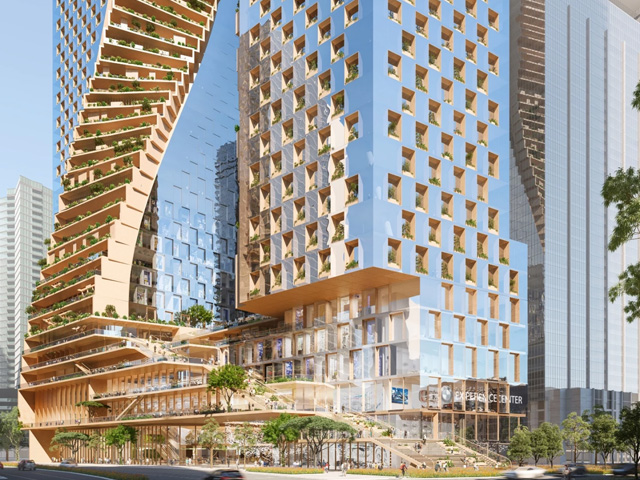 However, the supertall skyscraper has now received planning permission and is due to begin construction in Melbourne next year.

Southbank by Beulah (aka Green Spine) is designed by Netherlands-based UNStudio and local firm Cox Architecture, and was originally unveiled as part of an architecture competition in 2018 before being declared the winner.

The development will be located along the city waterfront and be centred on two skyscrapers: one will reach a height of 365 metres, making it Australia’s tallest tower, and the other will top out at 252.2 metres.

While the taller of the tower’s beats London’s 309.7-metre Shard for height, it’s shorter than New York City’s 381-metre Empire State Building – making it a bonafide supertall skyscraper, but would only be rated somewhere around 50th place in CTBUH’s official rankings.

“Southbank by Beulah will transform the way Melburnians work, live, learn, revitalise and play — it will set a global benchmark for an unprecedented lifestyle hub that caters to present and future generations and will assist in the future growth of Melbourne and its vision to become a truly global smart city,” claims Beulah Managing Director Jiaheng Chan

“Discussions have already begun with leading global brands in the hospitality, retail and cultural sectors who are looking for a transformative project of this calibre.”

The project’s total floorspace of 270,000 square metres will be divided between apartments with greenery-covered balconies, office space, public green space, rooftop gardens, a town hall, retail space, and more. The towers themselves will be defined by an attractive twisting design and incorporate a “spine” of greenery running up the facades.

“The spine twists into a series of outdoor spaces and green devices along the facades of the two towers, paying homage to Melbourne’s title of The Garden City, symbolically bridging the iconic Royal Botanic Gardens with Melbourne’s Arts Precinct,” says UNStudio.

“Pocket parks will be a focal point throughout the building, connecting neighbourhoods within the residential tower, providing residents with a sense of community and a place to relax, before culminating in a landscaped journey to the publicly accessible rooftop sky garden.”

Southbank by Beulah project has a budget of AUD $2 billion and is expected to begin construction in 2021, with completion estimated in 2026.