Squished in a narrow space between two buildings in Hanoi is a very special 35 meter long, five-story home.

Designed with 700sqm of liveable space to support the three-generational family who resides there, the lower two levels are completely open-plan, while the upper levels are made up of smaller, separate rooms connected by various staircases. 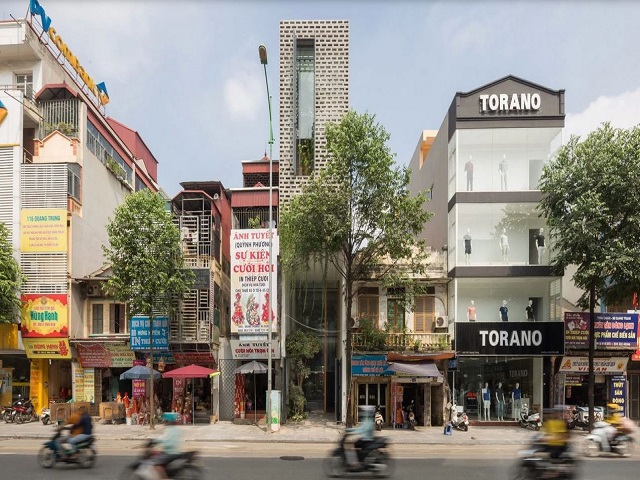 Vietnamese studio ODDO Architects made this arrangement possible through several deep light wells. Not only do these create visual connections between rooms, but they also allow daylight to filter down to every level.

“With this project, we question what is needed for a modern living space that accommodates three generations of Vietnamese, while trying to deal with the problems in high-density housing areas,” said ODDO Architects.

The design offers a new approach to the tube house, a housing typology that is common in Vietnam due to the abundance of long and narrow building plots.

While these homes often lack communal spaces and greenery, CH House features large living spaces where the family can come together and has plenty of room for plants.

“The design aims to bring a breath of traditional spirit to the modern life, and at the same time creating spaces full of natural light and ensure natural ventilation within the house,” said the studio.

The building’s facade is designed to make the best of its location on a busy street.

The upper level is designed as a double layer, with a perforated concrete screen fronting a window wall. This makes it easier for residents to naturally ventilate their home while shading it from the sun and preventing dust from entering.

Meanwhile, the base of the building is recessed in order to create some separation from the road.

Trees are planted in both the upper and lower parts of the facade to provide biophilia benefits, based on the thesis that humans have an innate tendency to seek connections with nature. There’s also an extra-large window, which gives the building a distinct identity.

“Nature is an important element, providing a positive effect on people’s mental health,” said the architects. “However, the rapid development of large cities creates the lack of green spaces for people to relax. That is why planting trees and plants inside the house is necessary and helps create a peaceful living space to release stress.”

The arrangement of rooms inside is kept simple, to maximise light and the feeling of spaciousness.

Six bedrooms are located across the three upper levels, along with extra living spaces so residents don’t have to always spend their time together. There’s also a terrace on the roof.

Many rooms are fitted with folding wooden screen walls, so they can be opened or closed at different times of day. Other space-spacing solutions include a staircase that doubles as a mini library, thanks to bleacher-style steps that can be used as seats and bookshelves.

The architects hope that CH House will pave the way for more greenery-filled homes in the city.

“CH house is not only a home for dwellers but also a place attempting to create linkage between humans and nature, which is very often missing in Hanoi due to many environmental problems and limited green spaces,” they said.

Images by Hoang Le via Dezeen