Buddha-Bar New York is a two-story restaurant featuring Asian cuisine based in the Tribeca neighbourhood in Manhattan. The main idea of the project is reincarnation.

This theme is expressed it in the rebirth of materials, space, and the big brand that history had begun from the opening of the first Buddha Bar in Paris back in 1996. 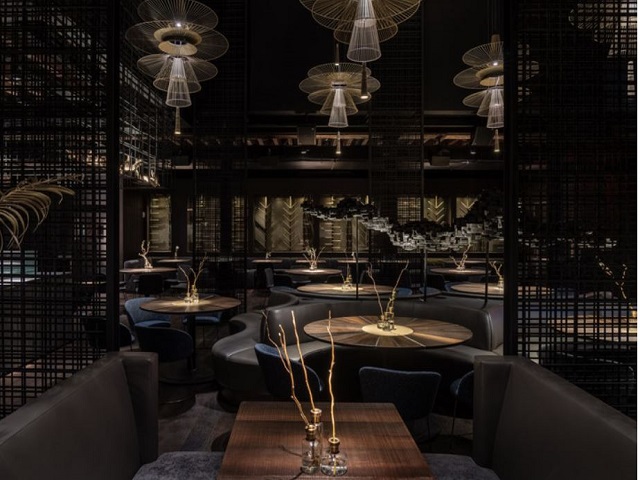 A 15-foot (4,5 meters) high glass statue of Buddha has been placed next to the entrance in the most spacious hall, expanding from the idea of a deity made of some yellow metal by adding some futuristic mood there through use of colour and lighting.

The Buddha is a parametric sculpture from almost 1000 flat elements, the sidecut of the glass has a frosted texture that doesn’t allow the light from tree projectors to get inside of the sculpture.

A 3-dimensional digital art projection creates the illusion of the light hologram. You could assume that it is not the sculpture that weighs almost 15 tons (13,5 tonnes), but an empty vessel inside of which something is going on, and life is dawning. The value of this sculpture is a million dollars.

The large-scale metal pendant lights in the main dining room are French brand Forestier created by the design of Kateryna Sokolova. They have an oriental mood but at the same time resemble some drones from coming times that are silently hanging in the air.

The interior in grays, browns, blues colors blends modern design with the building’s original vibe, again trying to express the reincarnation topic by the interior details. Sourcing timber that aged 800-4000 years according to the expertise for tabletops and part of wall surfaces.

The restaurant halls are embellished with dried plants, along with some uncovered typical loft spaces built at the beginning of the century, cast-iron columns, and the building’s original beams. High screens made from steel bars also touch on the age of the industrial boom in New York.

The designers and architects aimed to bring a new vision to the well-known brand, to keep its DNA and express it most authentically and insert it into the general context of New York.

Images by Andriy Bezuglov via ArchDaily