A modern research museum in the heart of the Mexican jungle has been unveiled by Norwegian-German Studio Viktor Sørless together with Mexican Estudio Juiñi, titled Xinatli.

The name of the research museum, Xinatli, is based on the terms Xinachtli from the Nahua language and describes the moment in which a seed germinates, growing into its life-giving form. 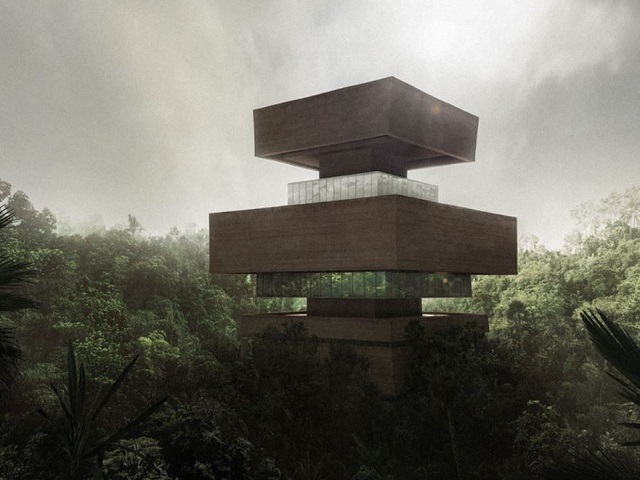 The “re-imagined pyramid” will consist of earth and wood loadbearing elements. These materials will be highlighted by working with local craftsmen; Chukum resin and sisal fiber will increase the weather resistance and tensile strength of the building to cope with the tropical conditions of the nearby rainforest. The design was made for Mexican art collector Fernanda Raíz, and the museum will be for biodiversity, human communities, art, and science.

Rethinking the stepped pyramid form, the project raises the widest layer from its base to the middle of the building and into the surrounding tree canopy. The design aims to celebrate culture while bringing visitors eye-to-eye with nature. Xinatli’s founder, the Mexican art collector Fernanda Raíz, noted that “Until now, museums have usually been a space where power is put on display. A 21st century museum should not be a showcase for power but instead a place that advocates for greater equity: in ecology, in art and in society.” Celebrating indigenous building practices, the construction of Xinatli will respect ancient building techniques prevalent in the construction of traditional dwellings of the Yucatecan Maya.

Construction is planned for an area in the Mexican jungle to the south of the country. The site will include a newly arranged stepped pyramid housing the main exhibition areas, along with several art pavilions and a local institute operated by scientists. “It was important to us to reference the step pyramid, to reconfigure and reinterpret it” explains Viktor Sørless. “The step pyramid is a symbol of a class society, the split between the rich at the top and the poor at the bottom. Our design deconstructs this hierarchy.”

Sørless goes on to explain that, “The building is a fusion of indigenous architecture and engineering expertise. Yet the plan is not to create a building that will last forever. It needs to be looked after, otherwise it will degrade. This element of transience acknowledges that life is a process of growing, perishing and becoming – and that we humans can make a conscious decision about how we treat our environment.”