Shopping centre a no-no, but yes-yes!

Located on a prominent corner site in the centre of Gwanggyo in Korea, a new Galleria designed by OMA/Chris van Duijn has opened its doors to the public. Marking the sixth outpost of Korea’s first and largest upscale department store franchise, the huge stone-like volume intends to become “a natural point of gravity” for local residents in the burgeoning new city.

Surrounded by tall residential towers, the new galleria provides a welcome contrast to the existing urban context thanks to the dynamic use of glazing and stone on the elevational treatment. The textured mosaic stone façade, which is designed by OMA to evoke the nature of the neighbouring Suwon Gwanggyo lake park, creates an almost opalescent or marbled texture. Puncturing this volume is a large element of multifaceted glazing, which gives the building an organic quality while also offering passersby a glimpse inside the department store. 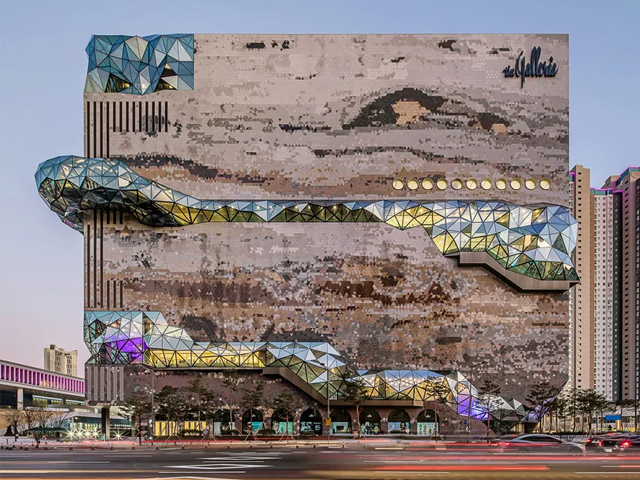 In addition to breaking up the opacity of the large stone volume, the multifaceted glazing also serves as a public route that connects the sidewalk to a roof garden, which includes both retail and cultural activities. Through the glass, the indoor program is revealed to the city’s passersby, while visitors in the interior can enjoy new vantage points over Gwanggyo. Formed with a sequence of cascading terraces, this public loop offers spaces for exhibitions and performances.

“The public loop entwines Gwanggyo and the galleria by making visible and tangible the activities of shopping typically hidden from the city,” claims OMA associate Ravi Kamisetti.

Galleria Gwanggyo is the largest department store that Galleria has opened in ten years and will play a pivotal role as a core branch providing premium MD lineup and the best VIP facilities and services. In addition, through collaboration with world-class architect OMA, it is well received both domestically and internationally for its creative architecture that is distinct from typical department store format, which applies a new paradigm that “transmits light throughout the building through the public loop”.

“Galleria Gwanggyo is the most beautiful department store and is expected to become a unique landmark representing Korea and the world, providing a new inspiration to customers,” boasts Galleria president and CEO Eun Soo Kim.