The show goes on: Renovated STC reopens to the public

Much beloved, Sydney Theatre Company has reopened after a two-year hiatus for renovations (and a global pandemic).

Australian architecture studio Hassell has renovated a theatre in a former wool warehouse on Sydney Harbour to modernise its facilities while emphasising the 100-year-old building’s history. 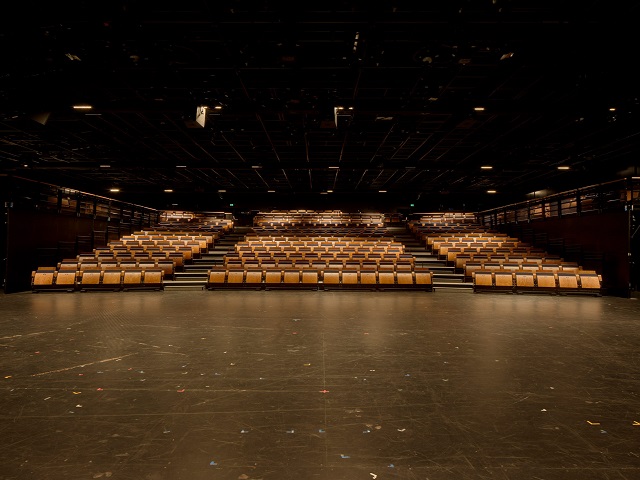 Expanded performance spaces, a new back-of-house corridor and improved accessibility are among Hassell’s additions to the Sydney Theatre Company’s Wharf building, which is part of a complex of timber “finger wharves” in Walsh Bay on Sydney Harbour.

Formerly used for wool storage, Wharf 4/5 was given over to the Sydney Theatre Company (STC) in the 1980s, and although much loved by both theatre-makers and the public, the building was in need of modernisation.

The architecture studio aimed to improve the internal circulation of the building while maintaining the “all-under-one-roof” philosophy, where the entire creative process — from playwriting to set-building, management, marketing, archives, rehearsals and performance — take place in the Wharf.

One of the key design elements to ‘free up’ space in the wharf was the removal of the existing fire tunnel, moving the programme, centring it, it freed up circulation in both directions, this streamlined the STC operations in a more efficient way.

Removing the tunnel opened up east-to-west operational circulation and meant Hassell could add a back-of-house corridor along the western wall, with tall doors enabling full-height sets to be moved from the workshop to the theatres.

Previously, back-of-house staff had to circulate through several rooms to install sets, which had to be dismantled into pieces first, costing time and money.

Hassell also created space by raising the ceiling above the theatres and workshop, allowing more room for the state-of-the-art theatrical rigging system and seating.

This was possible because the original roof has two peaks – by raising only the section in the valley between them, the alteration is visually hidden externally, in line with heritage protection requirements.

The Wharf’s two theatres were remodelled to increase their capacity, remove obstructive columns and make them adaptable to any performance.

Wharf 1, with a capacity of 350-420, has flexible seating offering three main configurations — End On, Corner and In the Round — while Wharf 2 has retractable seating and a capacity of 160.

There is also the option to retract the concertina skyfold doors separating the two theatres, combining them into one larger “Wharf 3”.

These features allow the theatre to be converted into rehearsal or multipurpose space in under an hour and facilitate immersive or experimental styles of performance.

The second aim of the renovation was to increase access to the heritage spaces while being clear which elements were historic, which from the 1980s and which were new.

When it came to choosing materials, Hassell wanted to recall the white volumes of the earlier conversion but add more depth than came from the flat, painted plasterboard.

They chose fine-grooved timber panels with a slightly glossy white finish, to contrast against the raw and unfinished nature of the heritage timber on the ceiling and floor.

There is a similar contemporary quality to the balustrades and handrails, made of thin white steel rods.

Meanwhile, the theatres have been finished with Blitz Total Sealer, a paint product developed in-house at the STC by head of scenic art Neil Mallard when the pandemic limited imports.

Other additions to The Wharf include a recording studio, vocal coaching rooms and a function room, while both rehearsal rooms and offices have more floorspace. Alongside the existing and beloved ‘Bar at the End of the Wharf’ with restaurant menu by The Fresh Collective with an all-Australian wine list by renown Sommelier and Wine Communicator, Samantha Payne.

The Wharf reopened in February after the two-and-a-half-year renovation.

Images by Brett Boardman via Dezeen