Set to transform the commercial hub of Toowong Village, a mainstay in the Brisbane suburb since 1986, is a new $450 million mixed-use development proposed by State Development Corporation. 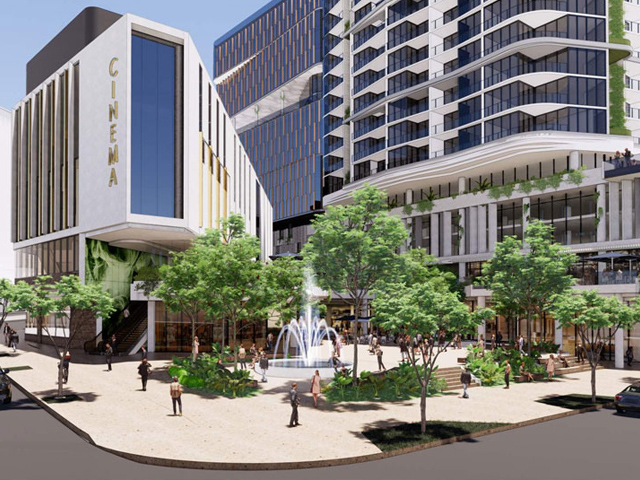 The developers emphasise the project is not designed to rival Toowong Village, but they do intend for it to become the “heart” of the area, serving as a “civic plaza”.

The project comprises retail, commercial, residential, entertainment and leisure facilities, along with services including childcare, a gym and a medical centre.

The developers had been searching for an appropriate major development site for five years, and pounced on the opportunity when Stockland put the 9 000sqm site on the corner of High Street and Sherwood Road on the market.

“Toowong Village is a successful and well-managed centre and we are not trying to compete with this. We’re creating a completely different offering and an entirely new streetscape for Toowong,”

McKinnon says most of the 150m frontage to High Street has been “a blank concrete wall” for more than 60 years, so the town centre project has the chance to create a whole new image for the street.

“Inspiration for the design has come from one of the greatest outdoor shopping centres in the world, The Grove Shopping Centre in Los Angeles, which incorporates the best characteristics of a high street in the one development,” he says.

“Brisbane has a similar climate to Los Angeles, and we believe the open street theme along with the open-air plaza is the perfect combination to enhance the existing Toowong area.

“Now more than ever, Toowong needs a heart — a civic plaza to give the suburb a focal point the neighbourhood and community can identify with.”

Around 50 percent of the site will be dedicated to public space, including an open-air plaza that will include a water feature that converts to a stage area.

The intention is for the plaza to be used for outdoor dining and food festivals, small concerts, community and special events, with continued easy access to the train station, bus stops and Toowong Village.

“We see the plaza as being an ever-changing meeting area — an iconic location that changes from day to night, week to week, and season to season,” says McKinnon.

The retail component can be accessed directly from High Street, Sherwood Road and Jephson Street, providing easy street-level entry to the property.

The development design will encourage pedestrians to use the internal plazas and walkways as access, linking Sherwood Road and High Street to Jephson Street, Toowong train station and the bus stop.

“Many inner-city locations either have too much residential or too much office space. High residential areas are often quiet during the day when people go to work, and similarly office areas tend to become ghost towns on weekends,” says McKinnon.

“The mix of retail, office, residential, entertainment and the services we are proposing should provide a strong and active development.

“We have been working closely with Council over the past six months through the DesignSMART process.”

He noted the company had decided not to proceed with a three-tower project that was approved by Brisbane City Council in 2016.

“The new design includes only two towers and we wanted to create more space to open up the site, providing the local community with more open and effective public areas.

“Our plans include upgrades to High Street with the building set back further from the street, allowing for a dedicated bus lane for the busy Toowong bus stop. Allowing buses to stop in front of our development without blocking the two inbound lanes will alleviate traffic in the area, especially during peak hour.

“If the DA is approved, our next step will be to seek expressions of interest from commercial and retail tenants.”