Designed and co-owned by Ravi Handa Architect, the wine bar was completed earlier in 2020 near September. 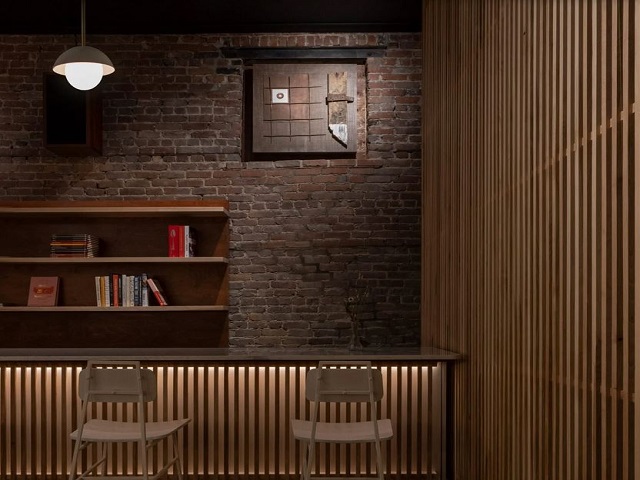 In true comradery, Handa, upon learning that a vacant space would be taken up by a big-box pizza chain, teamed up with some partners to lease the space themselves.

“There was an uproar in the community and we along with other local businesses on the block didn’t want a multinational chain as a neighbour,” Handa explained. “There was a great deal of pressure to create something soulful and anchored to place since we had convinced our landlords to break with a brand that we felt was perhaps void of soul and rather generic,” he added.

Handa envisioned an establishment that would draw cues from the cafe, offering a casual place for neighbours to gather in a nighttime setting. “While the spirit of the cafe is reflected in the wine bar’s fine lines and warm palette, the new space has an identity of its own, using the stem as a source of inspiration”,  Handa explains.

During the demolition of the existing space, several finishes and pieces of various materials were found and repurposed as artworks for the finished space.

“Scraps of wood and metal were collected in collaboration with artist and friend Jeremy Le Chatelier, who incorporated them into works of art,” the architect said.

The long, narrow space features some walls painted in a dark green colour that was chosen based on a piece of vintage, hand-painted wallpaper that was found on site.

Elsewhere, the existing brick demising walls are exposed in a nod to the area’s industrial past.

Slim slats of wood, intended to represent wine glass stems, are a recurring motif in the interiors. Thin wooden slats cover the bar itself, a motif that is also found in a privacy screen that separates the back-of-house spaces from the tasting room.

“[The screen] conceals the washroom and dishwashing area, without alienating workers from the lively energy in the bar,” said the architect.

In the restroom, a concrete wall was left in its original condition, contrasting the new tiles and fixtures that were installed during the renovation.

In an effort to support local brands and designers, the architect sourced furniture and lighting from within the city’s tight-knit design community. The lights are by a Luminaire Authentik and the furniture was designed by Atelier Appareil, the furniture arm of Appareil Architecture.

Images by Olivier Blouin via Dezeen