In a world where social media surrounds and permeates every aspect of daily life, it was only a matter of time before architecture was ‘influenced’ by it.

Sure, we take photos of buildings we like, architecture that inspires us, a nice view framed by a particular window detailing or #bathroomgoals, but the Defhouse in Milan has taken it one step further. 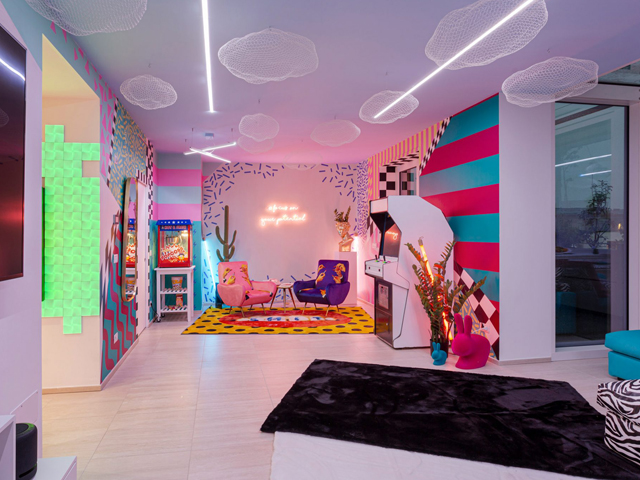 Designed to be the “ideal set for producing content”, Defhouse is currently shared by seven influencers – all between the ages of 16 and 19 – who are keen to grow their followings on social media apps like Instagram and Tik Tok.

Defhouse was conceived by media company Web Stars Channel (WSC), which claims the property is the first of its kind to appear in Italy. Following similar successes such as The Hype House in Los Angeles. Art director John Pentassuglia’s creative vision has included elements such as, cloud-print floors and glow-in-the-dark walkways are some of the home’s fun features.

These palatial homes are typically presided over by a management agency, which rent out the rooms to promising social media stars. In exchange for creating popular online content, the agency can help occupants secure lucrative sponsorship deals with brands.

Pentassuglia wanted the rooms of the house to stylistically fall somewhere between “luxury and pop”. He ended up becoming particularly fond of the geometric patterns and vivid colours associated with the Memphis Group – the design collective founded in the 1980s by Ettore Sottsass.

Patterns and colours are ubiquitous in the living area, where walls have been painted to feature a mixture of stripes, zigzags, triangles and dashes. Amorphous balls of white netting have been suspended from the ceiling to resemble clouds.

One corner of the room is dominated by a blue-and-pink sectional sofa with zebra-print inserts. There are also a couple of quirky soft furnishings from Italian brand Seletti’s joint collection with Toiletpaper magazine, including a yellow polka-dot rug that’s centred by an image of grimacing teeth.

Expansive glazed doors running along the front of the living area can be slid back to grant access to an outdoor terrace complete with a jacuzzi. Clouds appear again on the laminated floor of the kitchen. Its white storage cabinets also boast playful doodles of cooking utensils and ingredients.

A series of lengthy corridors lead to Defhouse’s sleeping quarters – some of the corridors feature an all-over chequerboard print, while others have walls inscribed with glow-in-the-dark writing.

Each of the bedrooms – as well as their adjoining bathrooms – has been completed in a different “Insta-friendly” hue and decorated with neon artworks that are shaped like emojis.

Apps such as Instagram and Tik Tok are continuing to gain power and influence beyond the world of social media celebrities, and now architecture.