The Mondrian Doha hotel opened in October 2017 in the city’s West Bay Lagoon neighbourhood. The 270-room hotel is constructed by South West Architecture with interiors by Marcel Wanders

Wanders’ Amsterdam-based studio created the interiors for the hotel, which features a number of grand, extravagant spaces in his distinctive maximalist style. 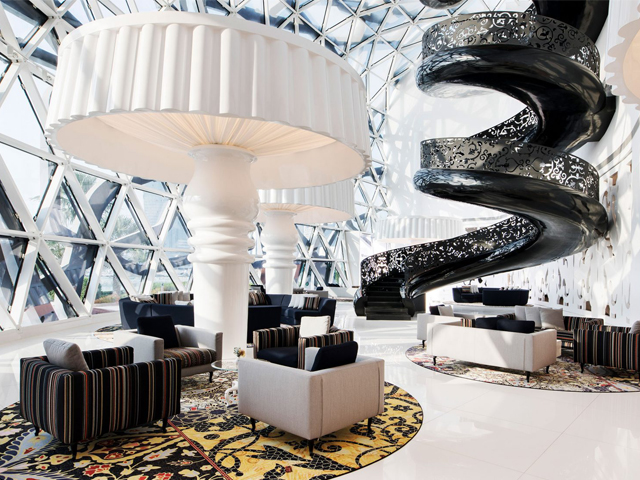 “The whole hotel is a place of fantasy and surprise,” Wanders said. “It’s really a space that is made for theatre.”

The hotel features a large atrium and lobby space filled with giant white lamps and a black helical staircase that has a balustrade with an ornate cut-out pattern, which extends up over four floors.

The tea room features illuminated white trees and chandeliers hanging from the ceiling, while the swimming pool is covered by a floral-patterned stained-glass dome.

Wanders created a shisha lounge that is almost entirely black and white but features hundreds of colourful glass lanterns suspended from the ceiling.

Other notable spaces include a 2000-square-metre, 18-metre-high ballroom, a swimming pool covered by a stained-glass dome, and every room in the hotel enjoys a view over the nearby lagoon.