After one of the largest floods of the year in central Vietnam, ShapeUS Studio was approached to help reimagine a damaged site in Hoi An as a restaurant and gallery, using design to nurture a new hub for the local community.

Home to the first 3D-printed food in the country and new exhibitions of local artists, it is a space that looks forward in a city that is steeped in heritage. 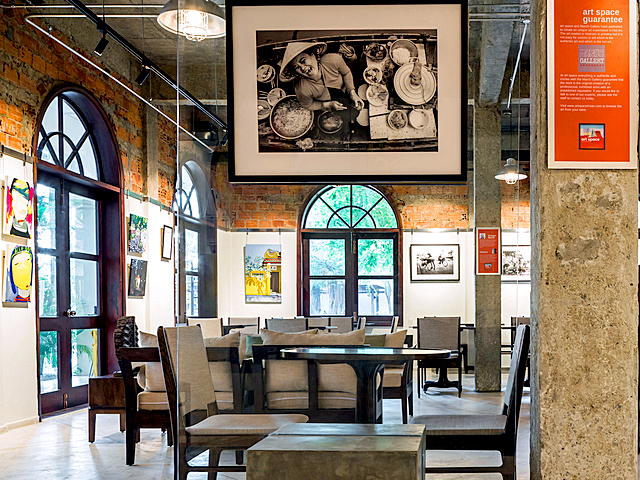 Instead of writing over the historical identities ingrained in the existing French colonial building, ShapeUs wanted to bring them to light, stripping away the ruined modern claddings to reveal the original structure. New white walls were placed to protect the base of the historic brick walls, whose revealed materiality becomes a part of the exhibit.

Hoi An’s iconic imagery, the city’s lanterns and bridges reflecting in the Thu Bon River, became central to the design approach. The new and old wall illustrates a reflection of past and future, across a dividing metal channel that becomes the physical support for gallery artwork. Wandering through the interior, art continues to float around you, suspended from the ceiling and embedded in transparent glass walls. As the gallery blends into the restaurant, the room’s central space is framed by the building’s existing concrete columns and beams. Our modern furniture design and illuminated bar bring a calm and comfortable smoothness against the exposed brick and concrete.

Elements of permeability and material juxtaposition continue in the exterior space. Outside, wooden beams extend from the structure of the building and progressively step down towards the street. Among the glazed beams and underneath a thin glass roof, more traditional bamboo screens hang and gently filter sunlight. The seating area pavement curves around the landscape and leans inwards, inviting people on the street to come in. The pavement step height was designed to provide additional casual seating for anyone to relax and enjoy the shade. Situated on the outskirts of the Old City in Hoi An, this gallery and restaurant is to be found by locals and only the most determined of tourists. We hope that the intersection of new food, art and architecture attracts a diversity of visitors and continues to foster new dimensions of community in Hoi An.