Berlin design student Tobias Trübenbacher has developed a lamp post with an integrated wind turbine that produces its own renewable energy and only lights up when needed.

Papilio was designed to slash the light pollution and emissions associated with street lighting and mitigate its impact on both humans and animals as well as the environment. 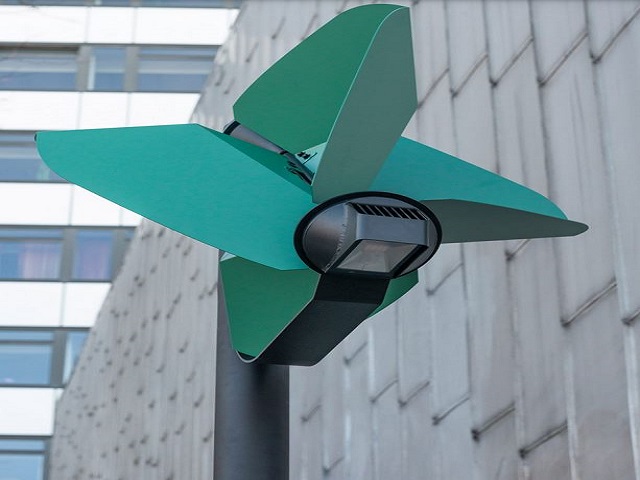 The motion-activated design uses wind – a natural, renewable energy source – to power its turbines. “If we want to maintain a future worth living in, we urgently need to transform our cities into climate-neutral, sustainable and less harmful places,” Trübenbacher says. “We urgently need to tackle light pollution and the loss of biodiversity coming along with it. This can only happen if cities generate energy themselves – through locally embedded, decentralised systems and ‘prosumer’ products in huge quantities spread all over urban spaces. In this context, wind represents an often underestimated yet constantly growing potential.”Papilio can be mounted to walls or set up as a freestanding lantern. The lamp should ideally be placed between three to six metres above ground, where ground-level winds are the strongest.

These winds are harnessed by a turquoise, pinwheel-shaped wind turbine with four aerodynamic rotor blades made of folded sheet metal.

Angled diagonally, the rotor can reportedly make use of complex airflows in urban environments including natural currents, wind tunnels created by tall buildings and smaller airstreams caused by passing vehicles.

The turbine then converts the wind’s kinetic energy into mechanical power, before an integrated 300-watt generator turns it into electricity and stores it in a rechargeable battery.

“I have already tested the lights at several locations in Berlin and under normal wind conditions, the generator generated an average of up to 12 volts of electricity at any given time,” Trübenbacher explained.

“Since today’s LED technology is becoming more and more efficient, this amount of energy is easily enough to charge the integrated battery and operate bright light.”

Applied at scale, he says the light could help to illuminate our cities without generating carbon emissions along the way.

“The world’s population continues to spend nearly a fifth of the total global electricity consumption on public lighting and thereby releases a significant amount of greenhouse gases,” Trübenbacher said.

“In Germany alone, street lightning emits at the moment around 2.5 million tons of CO2 per year.” Papilio is completely self-sufficient and could operate without the need for an “expensive underground electricity infrastructure”, Trübenbacher explained. Alternatively, the lights could be hooked up to the local power grid and divert any surplus energy to the city.

To mitigate the effects of light pollution on both people and animals, Papilio is equipped with an infrared motion sensor that only switches on the light when someone is passing by.

Its head is a so-called full cutoff fixture, meaning it is angled straight down towards the floor and does not emit any light upwards, while the light itself has an extra-warm, insect-friendly colour temperature of 2,800 Kelvin.