Developer Golden Jade commissioned WOHA to design a green and sustainable mixed-use development in the heart of Taichung, Taiwan, the first of its kind in for the city.

The result is Sky Green, which boasts sustainability and intimate, serene landscaping to help residents escape from the bustle of city life. 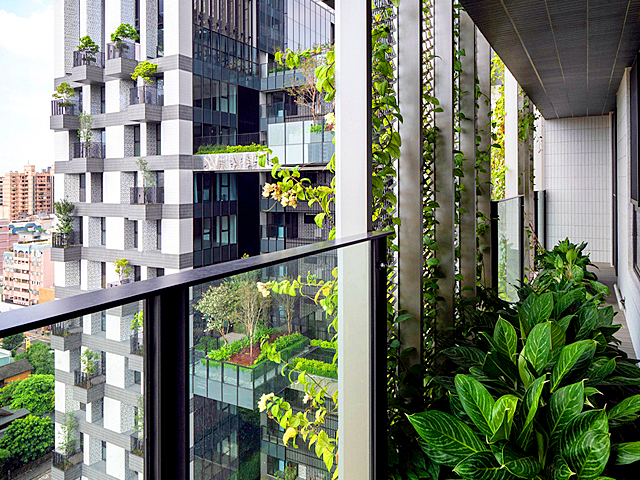 In 2012, WOHA was invited by the Taichung City Government and Feng Chia University to bring its exhibition Breathing Architecture to Taichung. This exhibition was part of a program initiated by the city government’s Gateway Project Masterplan, which focused on the design principles of sustainability, low carbon emissions, and smart cities.

The government was in the process of drafting new regulations to make Taichung a greener, more liveable city in its next phase of development. Following the exhibition, the developer Golden Jade, with Feng Chia University as an advisor, commissioned WOHA to design a green and sustainable mixed-use development in the heart of the city, the first of its kind in Taichung.

Sky Green a mixed-use development located at the heart of Taichung in a densely developed and vibrant neighbourhood. The site is made up of two rectangular plots, one facing the main city thoroughfare, Gongyi Road, and the other facing Daying Street, a quieter secondary street.

The development consists of two 26-storey residential towers with apartment units from level 4 onwards, as well as retail spaces. To connect to its setting, and the hustle and bustle of the streets, the building’s retail spaces are located from ground level to level 3. The shops have staggered patterned glass cladding to give an urban backdrop to the tree-lined pedestrian walkways and modern outdoor street furniture.

Away from the busy street life, an intimate, serene landscaped courtyard greets the residents as they return to their homes. Above the retail shops rise the two residential towers in addition to generous recreation facilities for indoor and outdoor activities. Both towers have deeply recessed windows and the façades are enveloped with protruding balconies with trees, sky gardens and mesh screens that serve as a trellis for green creeper plants. Landscaping is treated as a key material in creating the building envelope for the residential towers. The façade elements create deep sun-shading and the greenery acts as an active and living interface between the interior and exterior environment.

Large sky terraces at every five floors within the block extend the living space of residents from indoors to outdoors, creating a biophilic environment within a high-rise development. Every unit is visually connected to the greenery outside their apartment windows. A series of open, yet sheltered sky gardens, terraces, balconies, and planters create a breathable façade and visual interest, enhancing the real estate value of these apartments in a densely built-up area while providing spatial relief to apartment owners.

The architectural strategies of Sky Green are new for Taichung, but they have been developed by WOHA over the last 25 years, and many prototypes have been successfully built in Singapore and other regions. The design of Sky Green has been adapted to suit the local culture and subtropical climate, as well as to ensure safety during earthquakes and typhoons.

As the first high-density development in Taichung that also provides high amenity with its recreational facilities and ample integrated green spaces, Sky Green will be influential in defining the new benchmark of sustainability and skyrise greenery for the city’s future developments.