$830M contract won for the $2B Brisbane waterfront project

The ASX-listed Dexus awarded the contract to John Holland to build the 49-storey, north tower of their project, which will include 72,500sq m of office space. The deal also involves integrated retail areas and a new riverside walk with about 9000sq m of public open space. 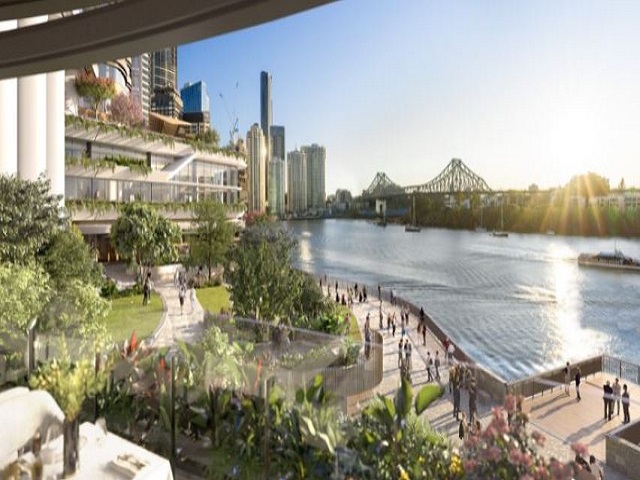 John Holland says they’ll start construction this year and want to finish by 2027.  At peak they expect to employ up to 650 workers.

Dexus—which boasts a total real estate portfolio of $45.3 billion—got approval from the Brisbane City Council for the transformation of the Eagle Street Pier and Waterfront Place precinct just before Christmas, in 2020.

When complete, the FJMT and Arkhefield-designed project will include a second office building of 43 storeys—bringing total office space to about 120,000sq m— a retail strip with shops, cafes, restaurants and entertainment, as well as parking for 450 cars and direct access to new moorings for commercial river craft.

The council’s decision reflects major development taking place in the Brisbane CBD, including the riverfront.

“This project will deliver an outstanding commercial and entertainment precinct for Brisbane as it emerges as one of Australia’s future cities,” John Holland chief executive Joe Barr said.

“We look forward to creating an iconic precinct that will breathe new life into this prime riverside location, while attracting new investment and local and international tourists.”

It’s the second time John Holland have collaborated with the country’s biggest landlord. They recently delivered an office block at 180 Flinders Street, in the heart of Melbourne’s CBD, and in fact became a core tenant, taking three floors for their headquarters.

“Our clients trust us with the complex and unconventional,” John Holland’s executive general manager David Lehmann said. “We provide Dexus with a combination of marine and building construction expertise supported by a team that knows live operational environments through working on major CBD projects across our building, rail and infrastructure businesses,” he said.

Asked about supply chain issues and rising construction costs for a project running up to five years, Lehmann said they had “budgeted with a lot of rigour.”

“We have been working on this project since early 2001, and the reality is we try to lock in key trades early in terms of those services that make up more than 40 per cent of the value,” he said.

“But some trades, like structure etc we won’t be letting in for a good two years, and longer with some of the fit-out trades.  We have our own data and use a lot of modelling to predict escalation and certainly we have a strategy to ensure that we are mitigating any risks in terms of some of the rising costs we are seeing in the industry.”

John Holland is hoping their two collaborations will augur well when the contract to build the second stage of the multi-billion-dollar project is awarded.

“I think it is a question of timing in terms of when that second tower will go,” Lehmann said.

“Obviously while we are building the first it would be a lot more economical to commence construction on the second but that will be dictated by the market and how well leasing goes.”

For its part, Dexus says leasing is going very well.

It announced in February this year agreements had been reached with two major customers to rent about 19,300sq m, or about 28 per cent, of the north tower.

Deloitte has agreed terms for 12,865sq m of space across eight of the sky rise floors in the building, which includes up to 30 per cent more space than their current Brisbane lease at Riverside Centre.