The project has centred on introspection and a subdued palette, using subtle touches to enhance the Renaissance-era bones of the building and neighbourhood. 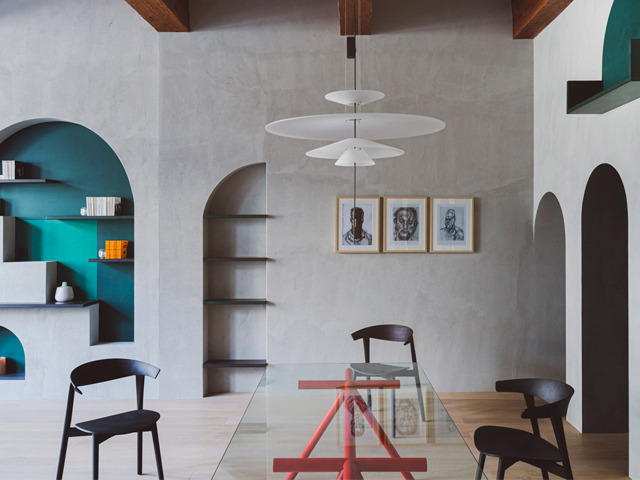 The apartment had fallen into disarray after sitting untouched for 60 years but the new owner requested a remake that would change his lifestyle and philosophy.

“The client’s wish was to create a serene space, a place where one would not feel overwhelmed by decorative information and where as much of the original features could be celebrated,” the studio told Dezeen.

“Arches were a way of opposing – hence celebrating and bringing forth – the strong rectilinear geometry of the existing space,” explained the studio.

“The main space is almost square in proportions, therefore choosing curves was also a great play on perception and overall balance.”

Arches reoccur throughout the home as doorways, niches and cutouts into the pale-grey plastered walls and panels in front of the radiators.

Many of the cutouts are adorned with sea-green coloured MDF.

It matches the cabinetry in the kitchen, which features a splashback with a stepped silhouette.

The only furniture in the living room is a glass table with tomato-red legs, black dining chairs and a grey lounge, and the other rooms in the house are just as sparse.

Original features, like the heavy oak-beam ceiling and a couple of ornate stone fireplaces were preserved and restored. 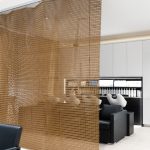