The restyling of Camparino in Galleria, was about retaining the history of the location, in terms of its aesthetic and social significance.

For Lissoni Casal Ribeiro, the renovation of an institution such as the Camparino has meant reviving certain tenets of Milanese interior design while seeking to maintain intact the concept of conviviality and sociality. 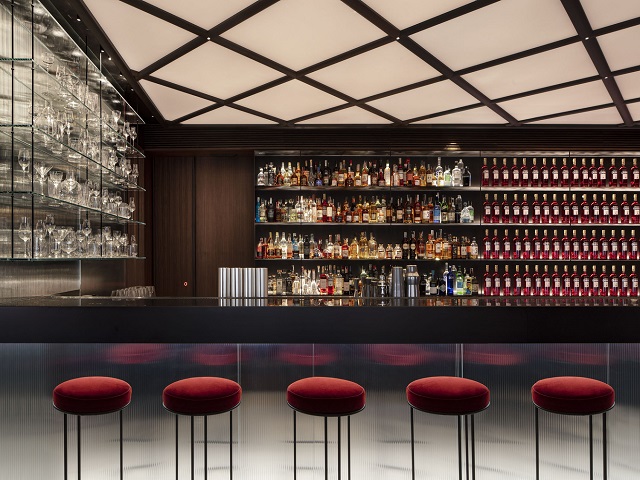 The Bar di Passo underwent a process of conservation and restoration. The only interventions in this area involved the refurbishment of both the lighting for the coffered ceiling and the windows of the entrance in line with those already present in the Galleria.

The style of the passage area that leads to the outside terrace has been renewed, giving a foretaste of that of the first floor without however losing the identity that links it to the Bar di Passo,. The tables and chairs on the outside terrace were renovated. Always with the aim of harmonizing and aligning the language, the staircase which connects the first floor and the new basement space is clad in walnut boiserie, recalling the stylistic code of the mezzanine floor, while the lift shaft is clad in burnished brass.

The space of the Sala Spiritello opens out from a large central fixture formed of a bar counter and a convivial peninsular table clad in backlit fluted mirror glass, both designed to enhance the preparation and the sampling of cocktails. The central wall dividing the two rooms is also clad in the same fluted mirror glass.

The architectural uniformity of the space is guaranteed by flooring in Venetian terrazzo and walnut boiserie. To evoke the memory of what Camparino once was, all the boiserie features floor to ceiling pilasters, the large arched windows on the Galleria side continue to accommodate the wood seating with velvet cushions and the end wall maintains the niches clad in mirrored glass. The visual impact of the location is exalted by the backlit rhomboid-patterned ceiling that recalls the coffering of the Bar di Passo, in addition to providing diffused and uniform lighting in a space which due of its position does not receive much natural light.

The Sala Gaspare Campari on the basement floor is totally new and was recuperated from the spaces that were originally given over to storage. The layout of the furniture in the room is flexible and can be configured to accommodate different types of events like bartender courses, private dinners, or comfortable and informal lounge space. Lissoni Casal Ribeiro has also worked with Campari on choosing and positioning historical pictures and prints such as the original “Spiritello” (1921) from the painter and illustrator Leonetto Cappiello, after whom the room is named, the illustrations hanging in the niches by Ugo Mochi and the “Campari” picture by Marcello Nizzoli in the Sala Gaspare Campari.