Taking one of the more left-field inspirations for a skyscraper, a sculptor David Cerny and architect Tomáš Císař of Black n’ Arch have released plans for an apartment tower in Prague resembling a shipwreck.

The 135-meter-tall mixed-use development would be the tallest building in the Czech Republic, well above the 111m high AZ tower in Brno. 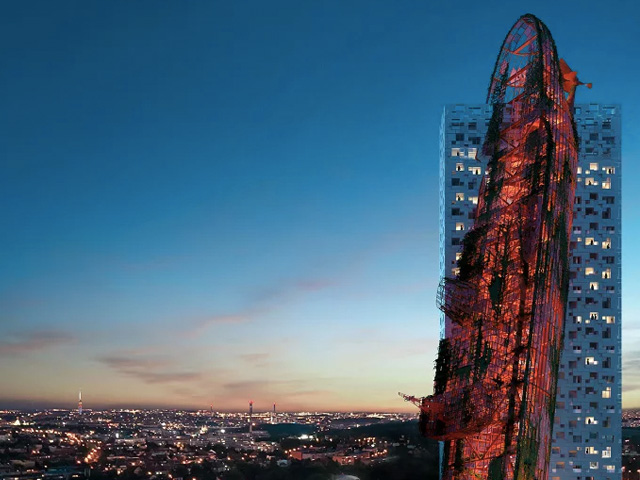 Located in the city’s Novo Butovice district, the project will house primarily apartments as well as retail and office components on the lower levels.

The public will have access to a viewing tower to look out over the city that will be accessed by external elevators.

A public pedestrian zone between the two entrances of the nearby metro station will be rebuilt as part of the project.

The site outside the city’s centre was chosen because high-rise buildings are completely banned in Prague’s town centre due to its status as a UNESCO World Heritage site.

“We have been preparing the Top Tower project for more than two years and the final version was preceded by eight other alternative proposals,” said Marcel Soural, Chairman of the Board of Trigema.

“During this time, we have collected and are still collecting input from experts, affected national and local authorities, and of course the local public, whose representatives have already been and will continue to participate in a number of participatory negotiations.”

In a video along with the renderings, Trigema explains that the inspiration for the project was in creating a bold symbol drawing attention to climate crisis.

With global ocean levels rising and impacting cities around the world, the ‘shipwreck’ component of the tower looks like it could have been flung there by the ocean.

The tower will be equipped with a comprehensive rainwater collection system and hopefully achieve LEED Gold certification.

Pending approval from the city of Prague, construction would be scheduled to start in 2021 and take three years, with costs estimated to hit around 2 billion Czech Crowns ($84.5 million).

The One&Only Mandarina hotel is situated above a string of sandy coves on the Nayarit Riviera, about an ...

Off-grid cabins are the stylish way to ‘commune with nature’

We’ve seen the rise of off-grid cabins spring up all over the world, such as Unyolked in NSW ...

After the release of a prototype and the exhibition in La Biennale di Venezia, SUMMARY studio presents the ...

Sydney’s heritage-listed Minerva Theatre will undergo a $50-million revamp as part of plans to transform it into a ...

Villa Cardo is a three-bedroom house designed by Studio Andrew Trotter, has been built with local materials and ...