Developer Aland to build over 1000 apartments in Southport

The company initially had plans to build 1500 apartments but has since downgraded the tower capacity to 1156 dwellings, which includes 137 short-term accommodation units. 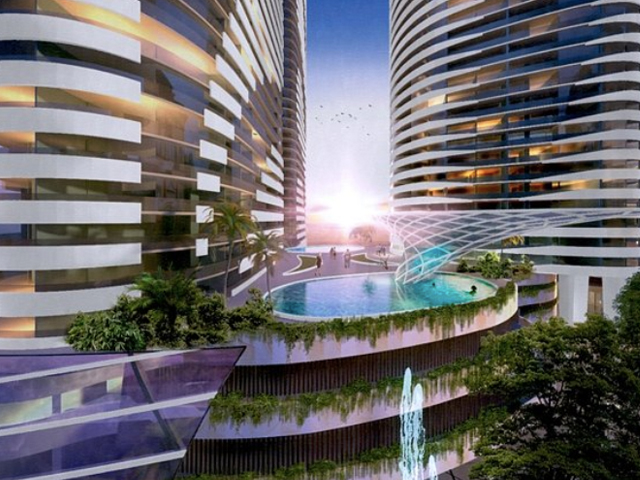 Designed by Tony Owen architects, the towers would vary in height and have one straight side with a quarter-arch shape curving around to the other side.

A rooftop swimming pool on the outdoor podium, and water features and fountains are visible in the plans.

The project is planned for a site of vacant lots and will be developed over four stages.

Rising 18 storeys and supported by a large podium at the base, the shortest tower will be built first.

Finally the 62-storey and 71-storey super-towers will reach completion.

Undulating glass and steel dominates the exterior aesthetic of the towers.

Restaurants, retail, a function facility and theatre would all be incorporated into the lower levels of the project.

Negotiations had been made with Gold Coast City Council, who required the towers be reduced before gaining approval.

Council officers flagged traffic as a problem for the site, as infrastructure updates and sewerage improvements are on the cards there.

One submission to the development application was made against the proposal relating to traffic impacts for access to a neighbouring property.

To upgrade the sewerage system Council said they would provide $4.9 million.

However the final estimated infrastructure charge for the development is expected as $26.8 million.