A new $32 million mixed-use development planned for Victoria’s Clifton Hill, The Foundry, is on schedule to kick off in 2021, indicating forward growth for commercial development in Melbourne.

Pallas Group’s plans for its mixed-use development, The Foundry, spanning 37,000 square metres is in planning. 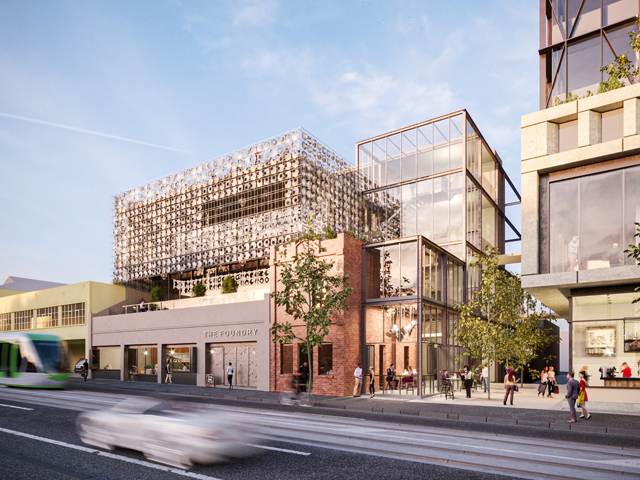 Pallas Group, the parent company of Pallas Capital and boutique developer Fortis, snapped up the Clifton Hill property for $32 million, signalling plans to redevelop the site as a commercial and retail precinct earlier this year.

Subject to approvals, Pallas director Charles Mellick said the Bates Smart-designed project remains “on-track” to kick off construction in the fourth quarter of next year.

“Our construction sites have remained open and operational as usual,” Mellick said.

“We are currently in conversation with major supermarkets and specialty store operators about potential leasing opportunities.”

Speaking more broadly on the impact of Covid-19 on the market, Mellick said the group had seen a general slowdown in residential sales, “However we have sold several million dollars’ worth of off-the-plan luxury properties during this period to the downsizer market.”

“It [Covid-19] has not affected enquiries into our commercial developments,” Mellick added.

The site sits on the south-west corner of the block by Alexandra Parade, Smith Street, Council Street and Reeves Street, within a range of commercial buildings from Victorian, pre-war and post-war eras, roughly four kilometres north-east of Melbourne CBD.

The precinct will comprise a “market hall” offering food and drink tenancies, and a full-line supermarket.

The heritage buildings at 612-614 and 616-622 Smith Street will be partly retained and extended to four-levels high.

City of Yarra said a decision on the development would be announced by the end of May.