This home has space for multiple families AND a temple

What was previously two separate flats in Mumbai, India has now been converted into a multi-generational home, complete with a temple.

Decorated by local studio Act of Quad, this “minimal but playful home” located in the city’s Ghatkopar suburb – has four-bedrooms, across the 325-square metre apartment and  is dotted with orbs and circles. 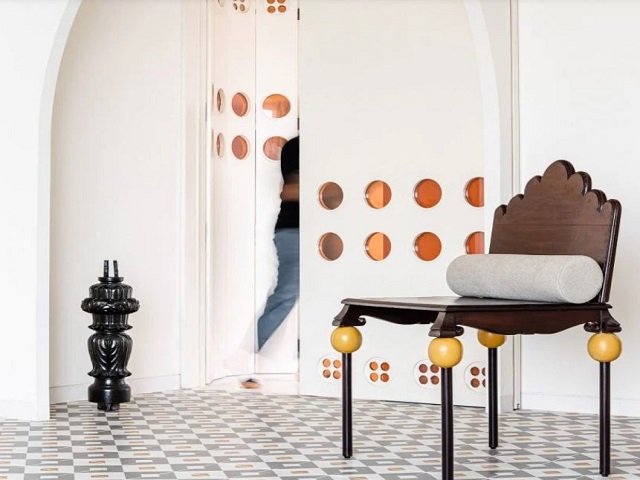 Some serve a purpose as mirrors or lights, while others are simply decorative wooden sculptures placed on the floor.

“We tried to soften the severity of the minimalist architecture with smooth outlines and rounded shapes,” said Priyanka Itadkar, who co-founded The Act of Quad together with Falguni Bhatia.

“The objective of staging the spheres around the apartment was to generate a storyline from the sphere’s perspective as if the orb was tumbling and travelling around the home, discovering every corner and object.”

This game of opposites was designed to consolidate the generations of family’s various different tastes into one cohesive whole.

“The grandfather, being a cartoonist, really wanted a playful environment in contrast to the minimal taste of his engineer son,” Bhatia explains.

“The family desired a minimal but playful design, which was the opposite of their current old fashioned and ornamented home, made in the late 1940s.”

In the entrance hall, a decorative wooden sphere clings to a corner next to the door while underneath, a console table with a contrasting white orb balanced on top wraps itself around the same wall.

The foyer opens up into a large open-plan living and dining room, as well as a kitchen that can be hidden behind sliding partition walls.

Characterised by its symmetrical set-up, the main room features a round dining table with a hemispherical base on one side and a circular coffee table surrounded by curved benches on the other.

The two areas are divided by a wavy screen in gradient colours that evoke a sunrise.

This same undulating silhouette is picked up in a handmade column, which winds and twists its way from floor to ceiling next to the TV.

From the central communal area, the apartment unfurls in two opposite directions. One wing houses the parents and grandparents, as well as a temple and family room, while the daughter’s room occupies the other wing alongside a guest bedroom and study.

After itemising all of the family’s household items, the studio incorporated plenty of storage into the plan to ensure that everything could be stowed away in its designated place.

The Act of Quad designed and fabricated most of the furniture and artworks in situ, in order to integrate them seamlessly into the architecture.

In addition, a number of intricate woodwork pieces were brought over from the family’s old home and refurbished to create a sense of continuity.

Among them is a chair with turned legs and spindles that is housed in the apartment’s own temple, known as a mandir.

Here, a small antechamber leads to the inner shrine, which is crisscrossed by intersecting white arches and houses a statue of Hindu deity Krishna.

Images by Ishita Sitwala via Dezeen