Described by the firm as a “naturally-lit filtered cocoon” forty times more airtight than the average house, The Fern is an 11-unit development located in inner Sydney’s Redfern. 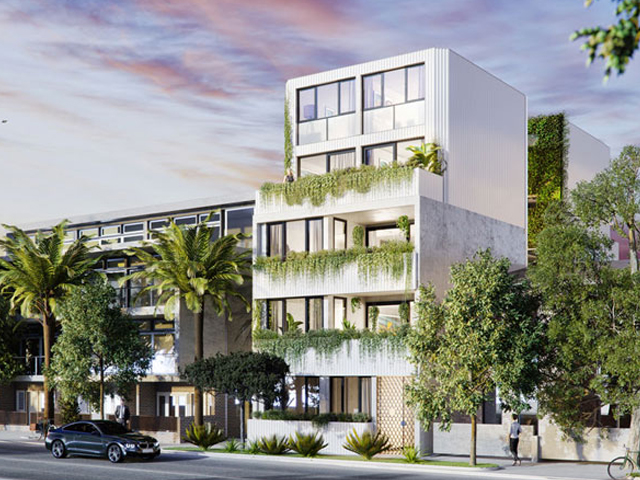 There are around 100,000 Passivhaus buildings around the world and only a handful in Australia, all of which have had to meet very intense specifications of environmental sustainability and post occupancy evaluation.

Steele Associates Director Oliver Steele told SpecifierSource he was attracted to the concept because it goes much further than typical eco styles, which can often be vaguely defined and not actually offset environmental impacts.

“Passivhaus’ scientific approach has shown, if you meet the criteria, you are basically guaranteed to have very comfortable stable internal temperatures and high levels of occupant wellbeing. The biggest difference between this and other green projects is physics, rather than just a creative idea that’s not substantiated,” Mr Steele claims.

There are five focuses of The Fern’s design that set it apart, the first being air tightness. Steele described the apartments as “a well insulated glazed esky”, but to avoid suffocation leads to the second focus: heat recovery ventilation.

The apartments use an allergenic-grade filtering unit that brings in constantly filtered fresh air to the bedrooms and living areas and exhausts air from the kitchen and bathroom. The incoming and outgoing air pass over each other without mixing.

Third is good insulation. The Fern’s insulation is double that typically used. The fourth focus is doors and windows, which are triple glazed and about six times more energy efficient than average. The fifth is eliminating thermal bridges created by large concrete slabs. This is achieved by putting in insulation barriers within the concrete slab and within the structural supports through them.

Oliver Steele says that on top of the additional capital costs, barriers to Passivhaus being taken up in Australia include a lack of knowledge in the market about the benefits and risk aversion from investors and developers. “The idea with The Fern was that someone has to do it to show that it can be done to overcome these barriers, and to show people what’s possible so that they can start asking for it.

“We wanted to show the development industry what’s possible so they can feel more confident in doing it, and to test that it’s really cost competitive or cost viable so that those cost barriers can be overcome,” he said.

The challenging small block in the inner city required creative thinking from Steele, who decided to split the development into front and rear wings with an atrium in the middle.

With two 15-metre-high green walls in the centre, walking into the atrium is intended to be like walking into a calming rainforest retreat. “It gives you the ability to block out the city while being right in the middle of it. You don’t have to retreat to the suburbs to get some fresh air,” Steele said.

The serviced apartments, due to hit the market later this year, will be available to be rented so that people can test-drive passivhaus for themselves.

Steele says his next project will definitely be passivhaus; “We’ve learned a lot on this project about how to make it work in a Sydney context, so we’ll be taking all that on board,” he claims.