A mixed-use mega-development planned for North Brisbane will revamp an old industrial site that will cater to the state’s ageing population.

The Lamington Markets $150 million project in the inner-ring suburb of Lutwyche will include two 12-level apartment tower skyscrapers set above a retail complex. 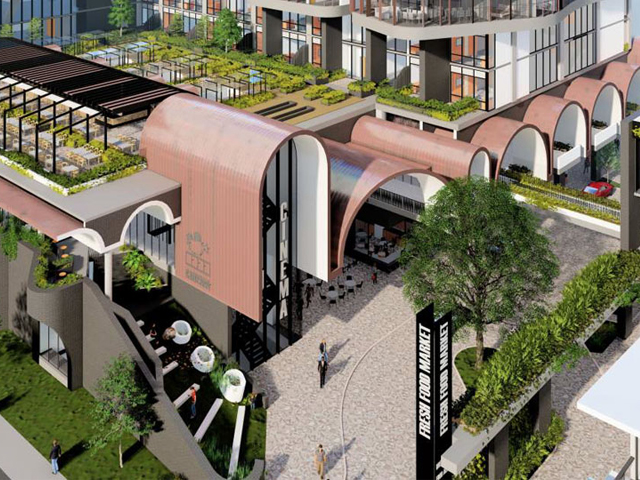 Designed by Conrad Gargett architects, the project will include 139 apartments in one to four bedroom configurations and sits on a 7333-square-metre site.

An architect’s statement attached to the development application describes a “sculptural family of towers” that “creates an impression of a cohesive neighbourhood within the skyline”.

“The built form also creates a powerful cultural presence expressed in dynamic volumes sculpted to project a fluid and transparent public dialogue with the surroundings,” said the architects.

“The development began inception as a typical transit-oriented mixed-use development,” Conrad Gargett’s John Flynn told The Urban Developer. “We see it as becoming the heart of Lutwyche.”

Meridian Property Holdings director James Rennell says the project is a “massive opportunity for 2020 and onwards”.

“I think there’s some amazing opportunity in Lutwyche, the inner-north area. We have a busway directly below us, and that gives us public transport connections.

“Being a retail hub, the site is a code assessable DA, and it can have a number of different outcomes, it’s not restricted by the amount of retail, so we’ve got a large component of retail in there.”

The project faced initial setbacks when the site went through a resumption process by the Queensland state government for the construction of the Airport link and the Northern busway.

Underground, the retail podium comprises a two-storey boutique cinema with eight cinemas, an events area and a candy bar.

On the ground levels, the architects have planned a “market hall” which takes influence from the Borough Market in London’s Southwark, Melbourne’s Queen Victoria Market and Brisbane’s former wet markets.

But, taking a more modern approach to the market hall concept, it will house an organic grocer and boutiques, and will be covered by an arched, translucent canopy that draws light into the space.

On the second floor an “urban farm” restaurant will occupy a large outdoor terrace with a food garden providing restaurant ingredients.

The third floor will accommodate a healthcare centre and short-term accommodation that serves as a respite centre.

It will include 23 beds in rooms with access to natural sunlight and ventilation.

Main entrances are oriented toward entryways to the busway to integrate the buildings with the transit hub.

A standalone three-storey office building on the north boundary is connected to the market hall by two bridge links.

A feature wall borders the site along Lutwyche Road, which will alleviate noise and air pollution and has arches cut along the facade, shielding the markets from the busy road.