As if it wouldn’t already be fun to play video games all day and call it a job? Well  game developer Ninja Theory have decided to entice their employees back to the office after remote-working with a lavish new office in Cambridge, designed by London studio Tala Fustok.

Set over four floors, the 2,325-square-metre office was designed to look like a lavish home or entertainment venue, including a blood-red private bar and a lush all-blue cinema and multimedia set up. 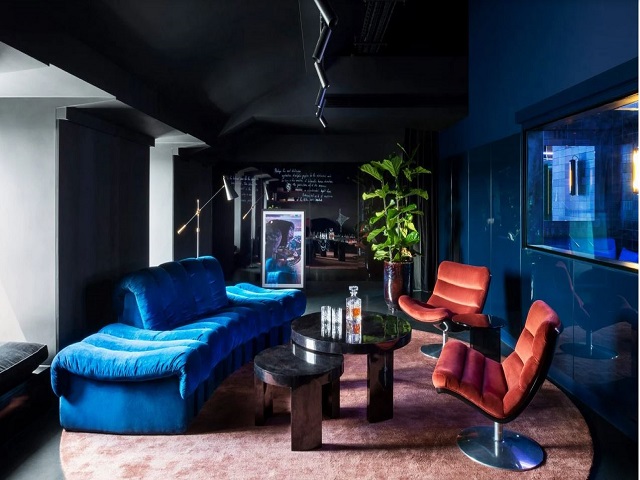 “With work-life boundaries becoming blurry, and as employees get more comfortable working from home, expectations for comfort and flexibility in the office environment are rapidly increasing,” Tala Fustok explained.

The studio used a palette of dark jewel tones to accent the interior, sometimes even covering entire rooms to create immersive environments reminiscent of the virtual worlds developed by the games company.

Employees enter the office through a dimly lit lobby with polished black concrete flooring and neon lighting, which Tala Fustok says helps to create the feeling of stepping into another dimension.

Other colour-coded spaces include a green room for motion capture, the all-blue cinema and the red bar, where silk-sheen carpet covers the floor, walls and ceiling to continue the otherworldly theme.

According to Tala Fustok, the different colours were used not just for their visual impact but also in the hopes that they would have a positive impact on the mood of those occupying the spaces.

A broad range of workspaces, which are spread over two floors, were designed to encourage a collaborative culture while providing varying levels of privacy.

On the first floor, in the heart of the building, a mixture of secluded and open-plan working areas sit next to communal spaces such as the cinema room and social club.

A terrace wraps one the side of the building, providing relaxed outdoor spaces. The interior also features movable walls that allow for meeting rooms to be expanded or reconfigured for different needs.

“Working during the pandemic and realising the impact it has had on the creative industries, it has really heightened the importance of the office and the pivotal role it plays in social working dynamics and the creation of powerful work,” Tala Fustok explained.

Images by Gilbert McCarragher via Dezeen