Magnet is an exercise in simplicity. It is the transformation of an auto parts repair shop into a restaurant. UNDECORATED was commissioned by Prince Concepts and partner Chef Brad Greenhill, of Takoi, to design their second restaurant in a former radiator shop.

From the inception, several non-negotiables were established, the two main ones being – The restaurant would be called Magnet and Magnet had to be a bar-centric restaurant 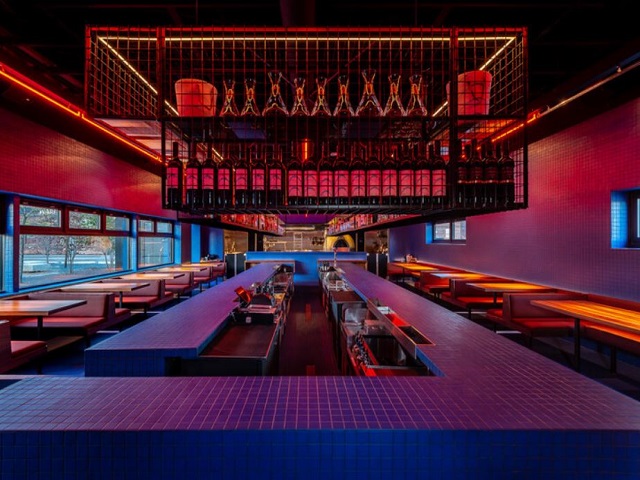 Thinking abstractly about the restaurant, the “bar magnet” and its laws of attraction was an inspiring idea. Its organizational principles are apparent in classic experiments that show iron shavings arranging themselves around a bar magnet, demonstrating the otherwise invisible magnetic field.

A series of square areas, or “program boxes,” for each space was sized with this knowledge. The program studies showed that the services occupied most of the existing building, leaving little space for a dining room. So, design team UNDECORATED decided to place the passive services without guest interface outside of the existing building on underutilized land in the rear. They were placed in three separate twenty-foot shipping containers.

Secondly, the bathrooms were placed outside of the existing structure towards Core City Park with the intention of combining bathroom services for the restaurant as well as the park. The transfer of the program outside the existing building expanded the size of the dining room. It was further expanded by incorporating the bar into the center of the dining room. The bar subsequently behaves like the “bar magnet” in organizing circulation and space around it.

Like UNDECORATED’s first restaurant, Takoi, a shared visual datum for everyone in the restaurant was important. The central bar challenged this concept. Typically, bar seating is higher than dining seating, creating a visual disconnect between guests. For Magnet, this concern was solved by lowering the bar to the level of the surrounding tables. The singular visual datum, accentuated by the placement of the central bar, curates a visual narrative within the restaurant. Consequently, it also established a visual dialogue between the diners and Core City Park.

Images by Chris Miele via ArchDaily