Close to half of the building’s internal walls were built using cross-laminated timber, effectively halving the carbon emissions associated with construction. 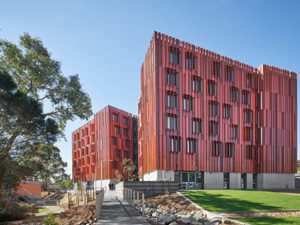 The building is the largest Passivhaus certified building in the southern hemisphere, which is very slowly seeing the style adopted further.

Passivhaus is an architectural classification developed by German physicists in 1991, which requires buildings to meet strict specifications of environmental sustainability and post occupancy evaluation.

Fostering community and spaces to study and socialise was one of the main focuses for the design of the building, and floor planning was developed around the model of one resident advisor per 30 students.

The project covers 6500 square metres of space, with five storeys of student housing and common areas and support accommodation at the ground level.

According to the architects, an added advantage of using timber over concrete is the atmosphere of comfort and warmth it provides. Warmth is meant only in an emotional sense though; the building is highly heat controlled and has sophisticated thermal insulation.

Danielle Pacella, Project Architect from JCBA said, “It is hugely rewarding to see how the design decisions we made are positively contributing to the everyday life of the students living at Gillies Hall; from how the spaces are used, the way they were intended, and how the warmth of the timber makes it feel like a home.”

Another associate architect on the project previously said meeting Passive House was a real challenge under Australian conditions as it is the “opposite climate” to Europe where the standard had originated, and that energy modelling was the most challenging aspect of the project.

This was overcome with a focus on solar shading to cut heat loads while optimising design to still provide good daylight.

Since the building was opened, indoor temperatures have stayed steadily between 22°C and 24°C throughout the year.

The university announced this year it would become 100 percent renewable by 2030, cut out gas and target Passive House for all new university buildings.

“We’re particularly proud of the interplay of pioneering design agendas that are resulting in Gillies Hall, yielding many environmental benefits and setting a new benchmark in sustainable development,” he said.

“As well as providing an outstanding quality of accommodation to its residents, Gillies Hall will be a crucial element of Monash’s expanding role in the region,” he said.

“Gillies Hall is one of the key components that underpin our goal to establish Peninsula campus as Australia’s leading centre of allied health and primary care education and research, and more broadly of Monash enhancing its status as a university of choice of domestic and international students.

“Our expansion allows for a deeper contribution to and engagement with the local community and employers in delivering substantial economic, social and cultural benefits to the region.”

The project was completed in 19 months and was opened earlier in 2019 by author and satirist Max Gillies, who was one of the first students to enrol at Frankston Teachers’ College in 1960.