Eighty Seven Park by the architect’s firm Renzo Piano Building Workshop is a beachfront building at the northernmost perimeter of Miami Beach in the North Beach district. 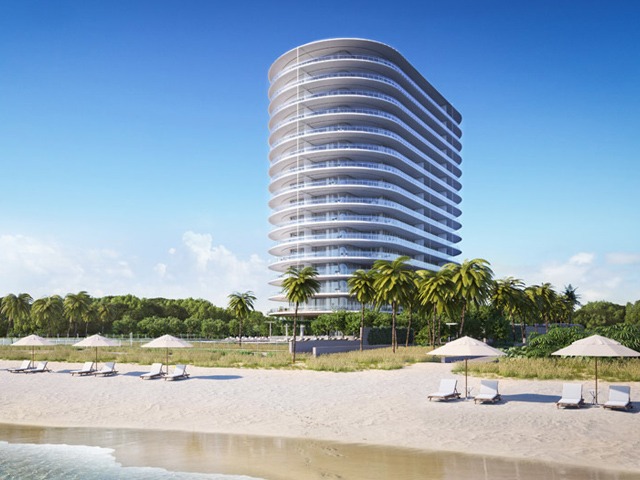 It is flanked by the Atlantic Ocean, as well as a 35-acre (14-hectare) public park to the south and a two-acre (0.8-hectare) garden to the north only for residents.

It contains 68 units, ranging from approximately 1,400 to 7,000 square feet (130 to 650 square metres). Each has a terrace and floor-to-ceiling windows for expansive views of the nearby parks and the Atlantic Ocean.

“The language we wanted to use for Eighty Seven Park is the language of lightness, a sense of a lack of gravity,” said Piano.

“When I look at how the glass and suspended decks of the building appear to float, and how they catch the sun and the light of the ocean, it’s fantastic.”

“Craftsmanship is one of the essential qualities of architecture and we went back to this tradition to bring this building to life,” the Pritzker-prize winning architect added.

“The quality of architecture is about poetry and beauty but it’s also about detail and perfection.”

Paris studio Rena Dumas Architecture Interieure (RDAI) has designed the interiors for the residential building with references to the verdant landscape informing the design.

The decor ranges from bright, white spaces to moody, dimly lit areas. Furniture in grey and green colours are fused with golden accents and lush plantings. American oak floors were chosen to relate to the colour of aged sea grape leaves, while Miami’s white sandy beaches are referenced in Venetian terrazzo.

“Capitalising on the architectural vision of Renzo Piano Building Workshop, we wanted owners of this building to feel that they are one with nature from their first step inside,” said RDAI artistic director Denis Montel.

“The palette created for this project was inspired by the surrounding natural elements of North Beach.”

At the base of the tower are a lobby and outdoor swimming pool, with cabanas and access to a sandy beach.

A second swimming pool, a cafe and juice bar, a gym, wine bar and library are among other amenities. There is also a spa outfitted with a Hammam, sauna and steam rooms.

“We leveraged the site’s best attributes — its adjacency to the park and ocean, convenient access to the city, and unique coastal ecology—and brought them together harmoniously to create an urban Eden unlike any other in South Florida,” said West 8’s creative director Daniel Vasini.

First unveiled in 2015, Eighty Seven Park will be the firm’s second residential project in the western hemisphere, following 565 Broome Soho, which it completed in New York City last year.