The masterplan for ‘La Reserve’, which is made up of a series of smaller buildings designed by SAOTA and planned around existing baobab trees in an effort to establish a dynamic and poetic relationship between architecture and nature.

The three key elements of SAOTA‘s design are the existing baobab trees, an earthen construction, and vernacular building techniques. 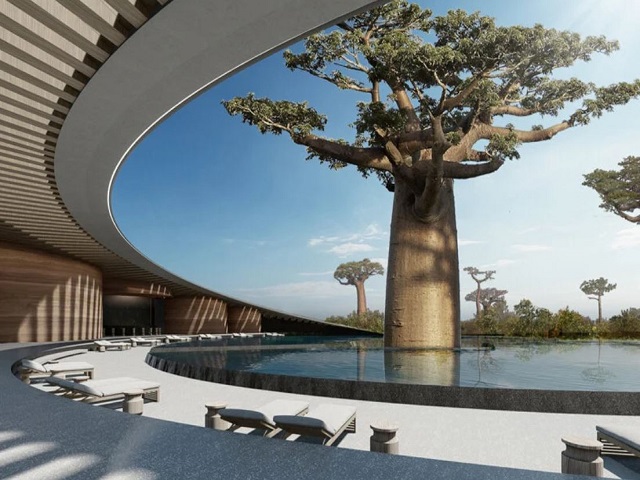 The entrance road to the resort weaves between baobabs, leading guests to the main reception that encircles the largest baobab on the site. This design strategy intends to promote connection to the landscape while speaking of Senegalese culture, in its custom for the largest baobab in the area to become the central gathering place.

The project proposes to utilize rammed earth walls and earth berms made using compacted clay-rich soil from the site. The large earth berms are planned to further integrate the architecture into the landscape, intertwining with the buildings and creating sinuous forms that both hold and conceal the buildings from view to create uninterrupted views out to the natural landscape. Berms are also used to create tall naturally ventilated walkways, which extend upwards to create thermal chimneys whilst still allowing natural light in from above. Berms also have several practical benefits and are used as visual and noise barriers – as well as to conceal back-of-house functions.

As well as the surrounding nature of the site, SAOTA also looks to local architecture and construction techniques. Cues are taken from the architectural typology of hut and kraal making – traditional methods of encircling and enclosing spaces are reinterpreted in a contemporary manner for the main building which consists of circles within circles – also a nod towards the fractal relationships predominant in vernacular African architecture. The club prive stage and boma screen are created using traditional weaving methods, allowing for complex curved forms to be built locally and by hand, and creating employment for the local artisans.

All the buildings share a common thread in that the same themes underpin them, that being an architecture that is very closely associated with the site via the use of natural material,’  explains Phillippe Fouché, director at SAOTA. ‘This creates an architecture that is rooted in place that not only respects its surroundings but elevates it and promotes a closer connection to the landscape.’

Images courtesy of SAOTA via Designboom