French studio Mars Architects has built a Japanese-informed wooden apartment building within the courtyard of a 1970s housing complex in Paris.

The studio designed the stepped building to reference Japanese temples, with slender wooden pillars holding up each floor. 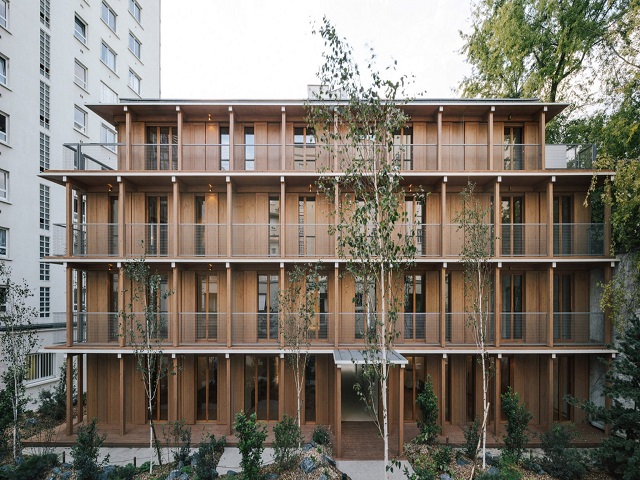 Located off the Avenue de Saint-Mandé in Paris’ twelfth district, the building was created for the French real estate company Gecina on a plot of land that sits above a car park and is enclosed by a block of flats from the 1970s.

The former concrete courtyard at the heart of the block has been landscaped and planted with ferns, resinous trees and ground-cover plants, among which the four-storey building was built.

Made entirely from wooden modules, the structural components of the 716-square-metre building are made from spruce. It was then clad in a European Douglas fir.

The apartment block’s design and the decision to use wood for its construction was partly the result of the difficulty in building on the enclosed site, which was hard to access from the street.

The block, which contains 14 flats, was created in part due to changes in local urbanisation plans that allowed the site to be developed.

Mars Architects aimed for a design that would fit with the surrounding buildings and not put too much weight on the car park that lies beneath the apartment block.

“The respect of the neighbourhood during construction, and the weight of the building on the car park structure were serious subjects,” Renard added. “For all these reasons, wood was the only logical solution to make the construction possible.”

The wooden modules were prefabricated in a workshop before being assembled in situ. Wood was also chosen in order to create a sustainable building. “Sustainability and eco-responsibility with a low carbon project also made us chose wood,” Renard said.

The apartment block nods to Japanese designs through the rigour of its frame, as well as the sliding wooden shutters that can open up or close the facade off to the surrounding garden.

Mars Architects set the shutters back from the front of the building to protect the woodwork from bad weather. This design also creates outdoor spaces for residents to use in front of their apartments.

The extruding ends of the wooden beams are covered in protective white paint, adding a decorative contrast to the natural wood colours.

An entrance canopy opens up into a stark white corridor that leads to an all-white courtyard that is shared by the apartment block’s tenants. It is accessed via a footbridge that connects to mesh-covered walkways that open up, loggia-like, to face the courtyard.

Inside the apartment building, white-painted walls were contrasted with wooden floors, ceilings and staircases that have been left unpainted, evoking the colours of both the wooden facade and the white courtyard.

The living rooms and bedrooms of the apartments are located on the garden side and each have access to the exterior through sliding wooden shutters. Sliding panels divide the two rooms, letting tenants choose how much or little to open up between them.

The apartments, which are naturally ventilated, all have the same layout and are entered from the courtyard side, towards which the kitchen and bathrooms are oriented.

Images by Charly Broyez via Dezeen