In a mega upgrade that includes the development of a hotel, apartment tower and office block, a flagging sector in Perth’s city centre will be revived in spectacular style.

Two worn-out, yet high-profile street fronts in the heart of the city could soon be transformed, with a $290 million development opposite RAC Arena. 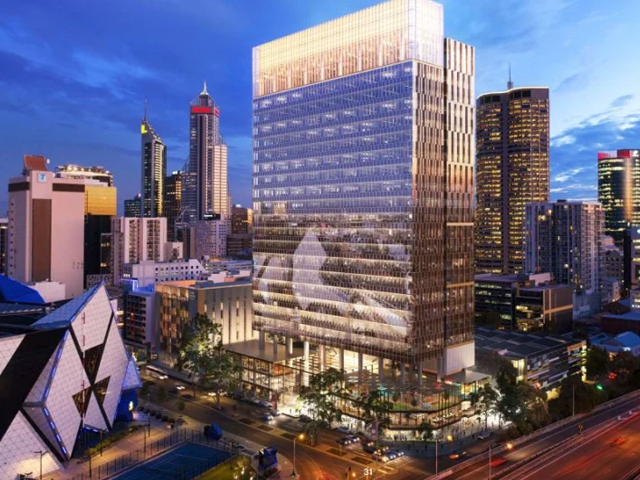 The plans include a public plaza and laneways connecting the concert venue to Murray Street, according to The Sydney Morning Herald.

Claridges Perth has applied to amalgamate five lots into a mega-site with a hotel, apartment and office development to complement and provide a “western anchor” for the recent Raine Square and Yagan Square upgrades.

It proposes to refurbish the existing Sheraton Four Points on Wellington Street and construct a 26-storey, 121-metre office tower beside it.

Backing on to this, it will demolish the existing two-storey Sara & Cook warehouse on Murray Street and the neighbouring commercial building, to construct a 33-storey, 105-metre, 155-apartment tower.

Renders for the public spaces show herringbone paving, planters and pocket parks with timber seats. The designs and materials are inspired by the area’s semi-industrial heritage, and the buildings’ jagged facades take their cues from the saw-toothed roofs of bygone industrial buildings.

The new towers would feature ‘green walls’ near their entries, and the development also includes a childcare centre and 24-hour end-of-trip facilities with almost 400 bike parking spots (50 public), 40 showers and 442 lockers.

City of Perth council officers have recommended the local development assessment panel approve the application on Thursday subject to conditions.

These include that the public spaces get construction priority; that childcare and end-of-trip facilities be open to the public; that existing publicly owned street trees be retained and protected throughout construction; and that the developer find an alternative spot for a fire hydrant for which it had proposed to cut down a street tree.

The developer will be allowed to remove eight large, mature gum trees along Wellington Street that fall within private lot boundaries, with just one to be retained for the plaza.

The city received an objection regarding this from a neighbour who stated the trees were potentially central Perth’s largest in both height and canopy terms, and represented rare examples of mature native flora in a city dominated by exotic species.

But officers noted the council as yet had not yet actioned its plan to create statutory protections for trees on private property.

“While it is acknowledged that it is preferable to retain mature trees, the location of the trees and the size of the development means that any retention would have a significant impact on the built form of the podium and tower above when considering the canopy of the trees,” council planners wrote.

“Additionally, the tree root protection is also likely to impact the location of the basements. This would have a significant impact on the project viability and also the design of the proposed development.”

Council officers noted the hotel views would be limited, with some hotel rooms and apartment looking into each other, but considered this reasonable given the inner-city location and the fact that the two buildings were part of the same development.

They wrote the development would provide sorely needed residential space and street-level activity, make the walk to and from the Elder Street car park safer and offer a gathering space for visitors to the RAC Arena.