Over 13,000 flattened aluminium cans decorate the facade of Dutch fashion label Daily Paper’s inaugural shop in the US, which has opened in Manhattan, New York. 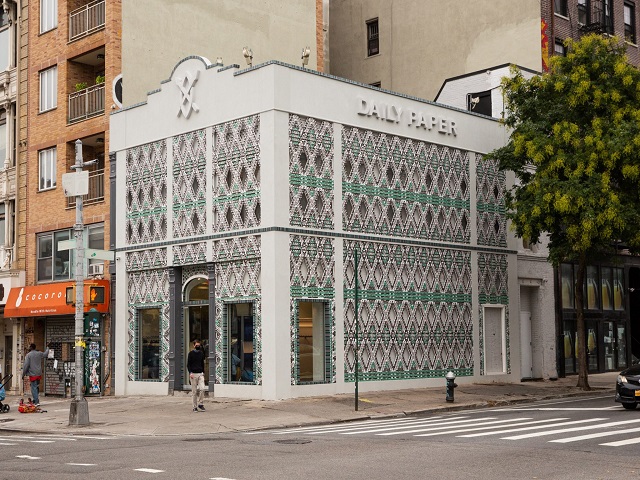 Up until now, the brand has exclusively been based out of Amsterdam, where its founders – childhood friends Hussein Suleiman, Abderrahmane Trabsini, and Jefferson Osei – grew up in the Oud-West neighbourhood.

All three founders are of African descent, with Suleiman’s family hailing from Somalia, Trabsini’s from Morocco and Osei’s from Ghana.

This has come to heavily inform the look of the store, where Heather Faulding of studio 4plus Design has subtly incorporated references to both Dutch and African culture.

The store building had been boarded up and was almost at a point beyond repair, but it has now been fully restored to feature a more ornately-shaped roof that emulates the form those seen on traditional Dutch townhouses.

Decorating the facade are thousands of recycled white, green and black drinks cans provided by Arizona Iced Tea, which appear to have been squashed.

“In order to create this effect, we estimate a total of between 13,500 and 14,000 recycled cans were used – all manually cut, compressed, glued and screwed on panels,” co-founder Osei explained in an Instagram post.

The cans are then arranged in an intricate lattice pattern that’s meant to recall traditional East and South African beadwork.

Upon entering the store, customers are greeted by a huge, circular floor mosaic that denotes the label’s name and logo.

Drawing on African cosmology, the mosaic is fitted with small lights that chart the star constellation visible in Amsterdam skies the day that Daily Paper was officially established – 1 April 2012.

The surrounding ground floor has been made to look like a museum, with bright-white surfaces and tall glass cabinets that display accessories.

A flight of stairs with vivid artwork incorporated on its risers leads up the store’s first floor, where there is a relaxed coffee bar and lounge. A portion of the flooring is made from glass so that customers can glimpse people milling around on the shop floor below.

There’s also space to hang out on the building’s rooftop. Daily Paper started life as a lifestyle blog before evolving into the fashion brand it is today, producing Afrofuturism-inspired clothing collections that take cues from different facets of Suleiman, Trabsini and Osei’s African heritage.

It isn’t the only fashion label that has recently launched its first store in the US – earlier this month Belgian brand Dries Van Noten opened the doors to a store in Los Angeles, the interior of which is filled with work from artists across the world.