Located in the city’s Yonge and Eglinton neighbourhood, the towers will share a joint podium and house 750 units. Toronto developers Reserve Properties and Westdale Properties recruited Williams for the project which will be called Untitled. 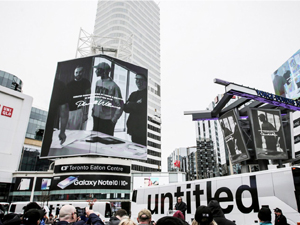 “As developers with a long track record in this neighbourhood, collaborating with Pharrell is about pushing ourselves to do better,” Westdale Properties chief executive Mitchell Cohen said.

“But it’s also an opportunity to give back to a community that has given us so much.”

Architects IBI Group and interior designers U31 have also been hired to work on the towers’ exterior, interiors and furnishings .

This will be Williams’ first residential development project, having previously designed a youth center in Virginia with architect Chad Oppenheim.

The Grammy Award-winning artist has worked as a fashion designer in collaboration with the late Zaha Hadid, Adidas and G-Star-Raw.

“The opportunity to apply my ideas and viewpoint to the new medium of physical structures has been amazing,” said Williams.

“Everyone at the table had a collective willingness to be open, to be pushed, to be prodded and poked, to get to that uncomfortable place of question mark, and to find out what was on the other side.

“The result is Untitled and I’m very grateful and appreciative to have been a part of the process.”

A teaser image of the project shows metallic facades detailed with a zigzag profile.

Design meetings were held around the world several times in the last year to finalise the project’s concept, of creating subdued spaces that ‘felt universal’ rather than trying to dictate a particular lifestyle for residents.

The project is aiming to be timeless with low-key fittings and focusing the physical space as a backdrop for the person occupying the space to use their imagination with.

Sales for the units are expected to commence in 2020.