Plans for an art-deco-inspired 15-storey mixed-use tower have been lodged with the Gold Coast City Council.

Westpoint Consultants, a self-managed super fund of Hamilton-based Salvatore and Anita Vecchio, is developing the MAS Architecture-designed tower as a “high-quality hotel and residential development”. 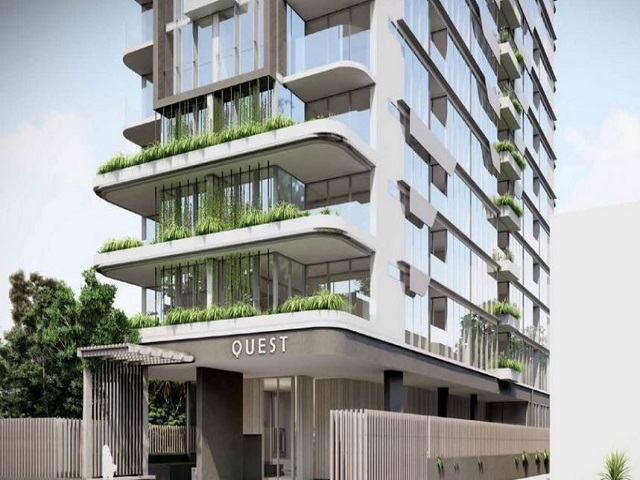 Quest Apartment Hotels is the proposed tenant for the 76-key hotel portion of the development—30 private residences are slated for the upper levels.

The architectural design report for 29-31 Lather Street at Southport said the development took style cues from heritage-built form in the area including the Southport Town Hall and the Cecil Hotel in Southport’s CBD.

“We have used symmetrical geometry and curved facade edges in a similar style to this historic built form … the side facade patternation is also symbolic of this movement,” the report said.

“The design for the proposed mixed-use tower incorporates references from local heritage architecture in Southport with a playful modern twist, enhancing existing qualities and attracting both residents and visitors to an inviting tourist hub on ground level.

“This vibrant atmosphere is of benefit to the site, which implements a green podium that extends to the height of the streetscape’s existing treeline in order to maintain minimal visual impact on its neighbours while keeping within the Southport PDA subtropical streetscape design guidelines.”

The tower will be in the Garden Residential Neighbourhood Precinct and incorporates views to Main Beach Broadwater and the Gold Coast hinterland.

The Southport priority development area encourages the development of the Gold Coast’s central business district across a 198.3ha parcel of land.

The development on the vacant 1012sq m site would comprise eight storeys of short-term accommodation and six storeys of private residences as well as a communal recreation level including a gym, pool and amenities.

“Quest Hotels have been interested in the Southport Priority Development Area as a new location due to its proximity to Queen Street and the Southport Business Centre, the Gold Coast Light Rail and Broadwater Station, and the Broadwater Parklands,” he said.

“The property owner and developer, Westpoint Consultants, is someone who we have successfully partnered with to deliver one other Quest location in the Brisbane City Council district and we are committed and keen to undertake another one with them.

“These contemporary spaces are carefully designed to meet the needs of Quest’s core market, the modern business traveller.”

According to town planners the tall and slender tower provides high-quality built form that reduces massing, compared to more bulky developments on sites along Queen Street.

“The proposed design allows for light and breeze between buildings while also ensuring view corridors can be maintained and the development presents well to the surrounding locality,” the town planning report said.

“The alternate is large lots with large built forms which dominate the local area and results in limited breaks when viewed from the surrounding area.”