Brisbane-based developer Siera Group has lodged plans for its maiden development on the Gold Coast, a $75-million apartment tower on Chevron Island.

The 1500sq m site, an amalgamation of three addresses between 39 and 43 Darrambal Street, was purchased off-market through a local agent for a combined price just shy of $5 million. 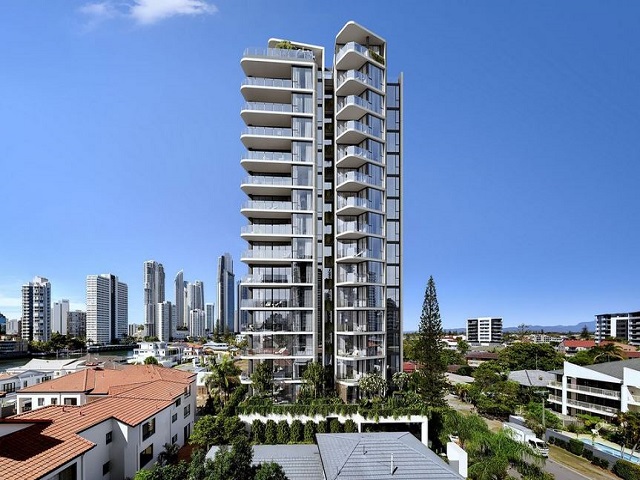 Leaning into the work-from-home phenomenon, the development will also include a 70sq m private office space including a boardroom, kitchen, hot-desking and video conferencing space as well as on-site printing facilities.

Siera Group managing director Brent Thompson told The Urban Developer it had worked closely with a team of Gold Coast-based consultants to deliver a product for local owner occupiers while supporting local businesses and the local economy.

“Over the last 18 months we have begun transitioning our business from townhouse projects towards medium-density apartment projects, particularly on the Gold Coast,” Thompson said.

“We’ve spent a lot of time looking at developments coming online from Surfers Paradise right down to the NSW border to understand the types of developments that are being brought to market.”

Chevron Island, on the doorstep of Surfers Paradise, the Southport Golf Club and the Home of the Arts (HOTA) precinct, has become a hotspot for development with up to 15 mid-rise developments currently approved or under construction.

Demand on the Gold Coast has been fuelled by recent migration led by pandemic-inspired sea-changers and intrastate downsizers which has led to record apartment sales and supply levels falling to historical lows.

Since 2014, Siera has forged a track record of building projects purely for owner-occupiers—typically living within three to five kilometres of its projects.

“There’s currently a lot of high-end, expensive, on-beach apartment projects going up and we saw a lot of opportunity for special sites, off the beach,” Thompson said.

“These sorts of sites are still very centrally located to all the amenities the Gold Coast has to offer while being within reach of local owner occupiers.

“As a developer, we are tuned into the wants and needs of this demographic and we have identified, over our many years within the industry, the areas of importance to build into our projects.”

The developer has engaged local artist Tania Blanchard to commission a painting for the lobby that symbolises the interwoven connection between community, river, hinterland and beach.

“Chevron Island really is an emerging cultural precinct with a great sense of local community and the aim of this development is to deliver it at a really good price point for the local market,” Thompson said.

“The development celebrates the Gold Coast’s urban fabric and pays homage to the neighbouring HOTA precinct which the Gold Coast council is investing heavily in.

“It will act as a continuum of the arts precinct, offering a lot of soul and artistic integrity firstly through its architecture, but also in its amenity by showcasing local art within the building.”

The group, which has acted as both developer and builder on all of its prior projects, has engaged an external Gold Coast-based builder to deliver the project.

If approved, the project is expected to launch to market later this year with completion earmarked for late 2023.