The NSW government has revealed new plans to build up Rhodes into a highrise region, adding 4,260 units to the waterfront suburb.

The highest towers would reach 25- to 45-storeys in a block immediately west of the train station, according to the Rhodes Place Strategy by the NSW Department of Planning. 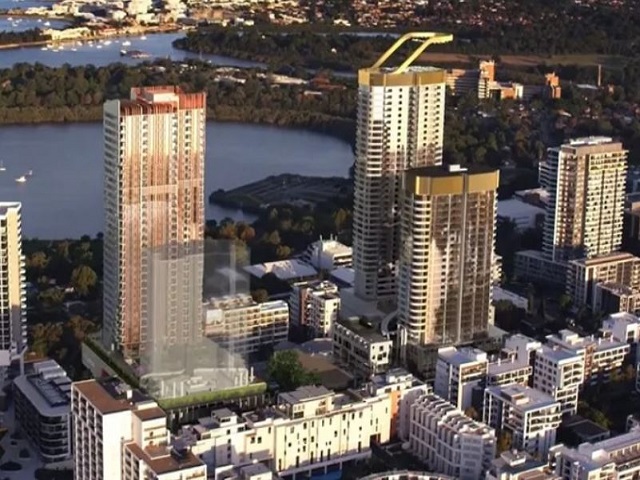 This inner-west Sydney suburb has already been the site of a number of significant development applications, including Billbergia property group’s Rhodes Central towers. The approved $350 million development on 10 Walker Street is already under construction and includes 688 apartments across two towers measuring 39-storeys—with a heliostat crown on the roof—and 28-storeys respectively.

The third $250 million tower at 34 Walker Street includes 400 apartments has also been approved, but is yet to be built.

Under the new plans, Billbergia could scale up this tower to 45-storeys, the highest in the new Rhodes neighbourhood.

Currently, the west side of the tracks contains multiple high-rises, while the east side is predominantly single-dwelling residential buildings, with the exception of Rhodes corporate park and industrial buildings between the John Whitton and Ryde bridges.

“The Place Strategy sets out clear controls that could allow the revitalisation on both sides of Rhodes railway station, creating vibrant new mixed use areas with the opportunity for people to live, work and enjoy great new public spaces right on the Parramatta River,” McDonald said.

“The strategy focuses on the big moves needed to give greater choice in housing and more local jobs near the station, giving residents the opportunity to walk to work or catch public transport with access to an upgraded train station and a new pedestrian bridge to McIlwaine Park.”

East of the station and overlooking the park and Brays Bay will be towers of between 25- and 37-storeys high with building heights tapering down towards the bridges over Parramatta River and the existing suburban area.

The plans include tower design controls to “make sure future taller elements in the area will have a slender look and a permeable skyline and limit a sense of a continuous wall of development” as well as 22,950sq m of new public open space.

New infrastructure is also a focus of the place strategy, identifying the opportunity for a potential new primary school, 200 affordable residences, a new large public foreshore park and pedestrian promenade and improved operation of Rhodes Station.

The draft plan includes a revised master plan developed in response to previous community consultations in 2017 and 2018, and will be on display until 9 October.