The tower, which topped out in May 2019 and is near completion, reaches 244 metres or 66 storeys. 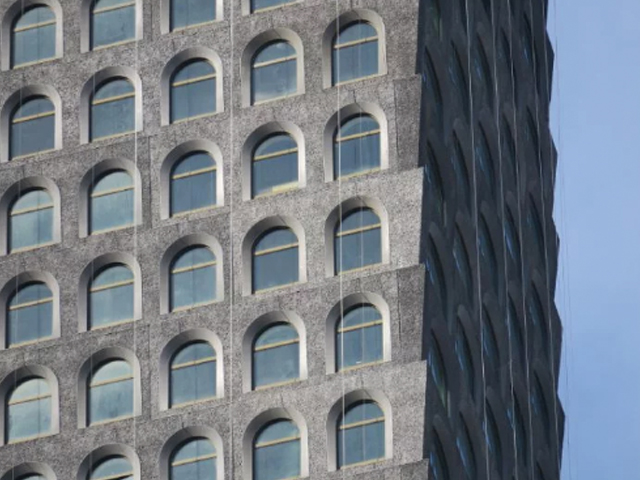 The top ten floors will be luxury penthouses and ‘loggia’ style units (ornate rooftop apartments popular among the wealthy in Italy in the 17th century).

“In defining the design for 130 William, I sought to celebrate New York City’s heritage of masonry architecture, referencing the historical architecture once pervasive upon one of the city’s earliest streets,” Adjaye explains.

“130 William evokes the past, but it also has a forward-looking design that explores the new possibilities of urban, vertical living.”

Wanting to provide a contrast to the glass facades that dominate in Manhattan, Adjaye clad the tower with a custom hand-cast façade with large-scale arched windows and bronze detailing.

“I call it a lava stone texture – almost like a molten material that’s just frozen,” he said. “I really wanted the reveal to have this texture where you saw the crystalline nature of the aggregates.”

The tower will have no shortage of amenities, including a health club with full spa, cold and hot plunge pools, dry sauna and massage rooms, as well as a state-of-the-art fitness centre with cool-down terrace and yoga studio.

Going beyond the standard fitouts, the building contains an Imax movie theatre, golf simulator, resident lounge, club and game room, a “religious” basketball court with clerestory windows, and a dark cavernous swimming pool that appears to be in the basement but is actually on the rooftop.

Residents can also access a chef’s catering kitchen with a private dining area, children’s activity centre, pet spa, outdoor terraces and a private rooftop observation deck located at the top of the building.

The architect has previously said the building will be “great for drones” and other photographers.